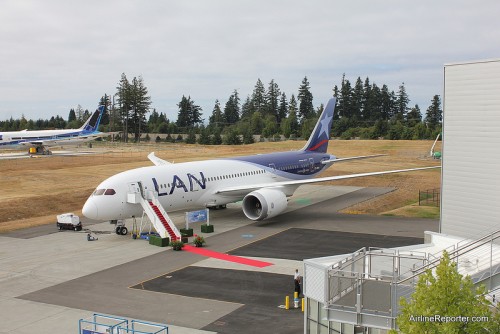 Image: David Parker Brown / AirlineReporter.com. PRESS RELEASE:
Friday, April 19, 2013 ’“ LAN announces that given the approval of the Federal Aviation Administration of the United States (FAA) of Boeing’s design for modifications to the 787 battery system, the technical teams of the Company are planning the implementation of the actions required by the manufacturer’s plan.

LAN will work with Boeing to implement these modifications, which includes a design for modifications to the 787 battery system.

According to the FAA, next week they will issue instructions to operators for making changes to the aircraft and will publish in the Federal Register the final directive that will allow the 787 to return to service with the battery system modifications.

During this process ’“in which LAN has worked in coordination with the Chilean Aeronautical Authority (DGAC), LAN maintained its committed to the highest safety standards and the areas of the company involved in the operation of the 787 were trained for over three years specifically for the delivery and operation of the aircraft.

LAN Airlines 787 fleet performed without incidents during the months it operated, and suspended flights on that aircraft type in compliance with the recommendation of the Federal Aviation Administration of the United States (FAA).