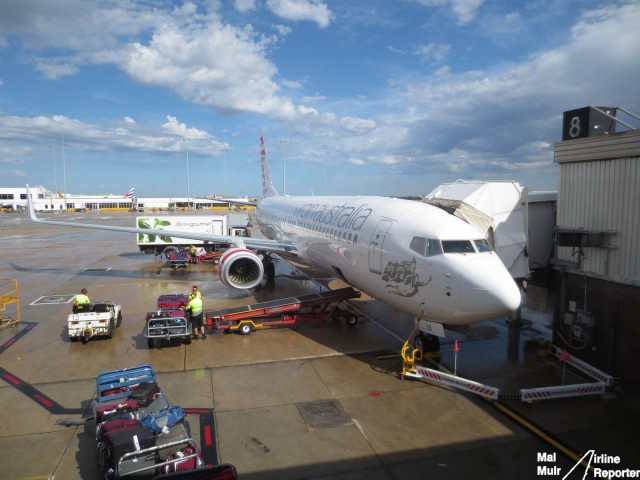 As an Australian expat, I will often have an opportunity to commute back to Australia for special events.  This trip was one of those times.  I got to head to Australia to attend a friend’s wedding (congrats Stuart & Michelle!) and thankfully it meant that I could combine a number of things together: a trip home to see friends and family, the wedding (obviously) and a mini mileage run with Virgin Australia to re-qualify for my gold status.

Though I had already re-qualified on points, I still had four segments required on Virgin Australia operated aircraft. As an AvGeek, I always look forward to these types of adventures. 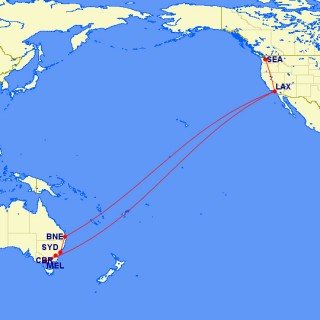 Since the wedding was in Canberra, I had no direct options and was to complete at least two flights.  The flight down to Australia was booked to Brisbane due to a previous return ticket. With a points redemption to get me back from Melbourne at the end of the crazy whirlwind trip (4 nights total in Australia) it meant that I would only have three overall flights to play with.

In the end, to make the minimum requirements, I ended up with Los Angeles to Brisbane to Sydney to Canberra to Melbourne (LAX-BNE-SYD-CBR-MEL).  Crazy thing was that the first three flights would be in one ’œday’ (in quotes because of time zones).  For some it would be the mileage run from hell, a total of 7775 miles on three different types of aircraft all with five hours in Brisbane and less than two hours in Sydney, but I was looking forward to it.

All flights to Australia depart late in the evening so that passengers can easily connect onto other destinations.  Check-in at LAX was painless and I had my boarding pass down to Brisbane handled and a lovely emergency exit row seat for my flight.  The terminal was busy, but I thankfully had access to the Virgin America lounge to relax and enjoy the peace and quiet before my flight. 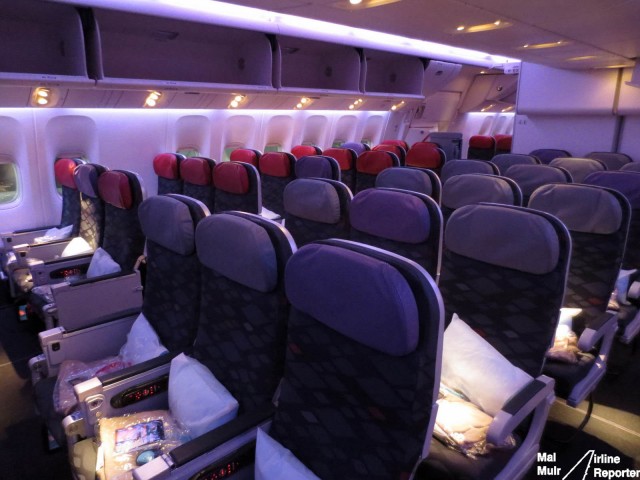 The Economy Cabin on the Virgin Australia 777-300ER this was my home for 14 hours – Photo: Mal Muir | AirlineReporter.com

The flight down to Australia was pretty good, but I can never really sleep on flights so the extra legroom was more than acceptable to allow me to stretch out.  The food was not that amazing (rarely is for me out of LAX), but the entertainment system did its job and kept me entertained.

There were a number of times where I felt that I was back home on this flight — back to being an Australian.  Hearing the Aussie accents, seeing cans of VB (the Australian equivalent of Bud or Millers) and a bottle of Bundaberg Rum on the drinks cart — it made me a little homesick! Good thing I was heading there. 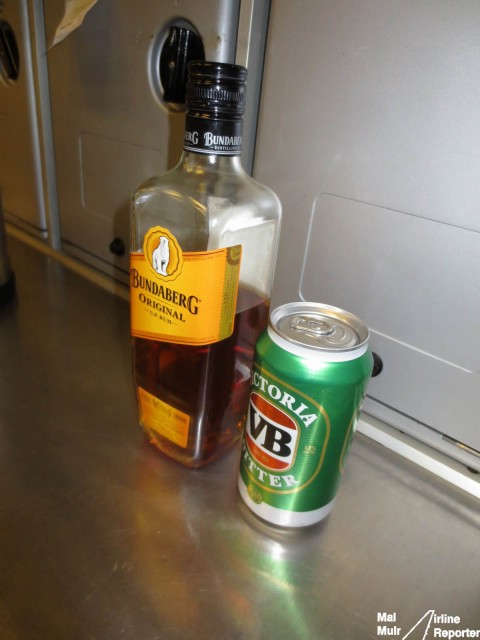 I know I am back on an Australian airline when I see Bundaberg Rum & VB. They are two truly Australian drinks – Photo: Mal Muir | AirlineReporter.com

Touching down in Brisbane, after 14 hours awake, I was greeted by my parents. Then we headed back to my home for a brief three hour visit before I was back to the airport for my next two flights.  I did say it was a whirlwind visit right?

I was back in Brisbane domestic and it was memories everywhere.  Back to the old familiarity of the lounges in Brisbane, easier security restrictions (though Brisbane never likes my watches but other states do) and no fighting for overhead bin space. 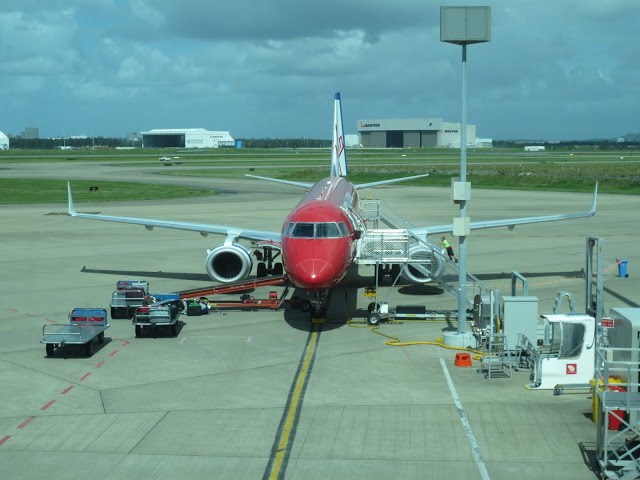 The flights in Australia went off without a hitch.  I got to try Virgin Australia’s new on-board domestic product on an Embraer E190 and it impressed me (though the offset windows don’t help even if higher in the cabin).

The biggest enjoyment though was getting a 737 with Boeing Sky Interior (BSI) for the short hour hop from Canberra to Melbourne.  It makes a difference flying the BSI aircraft compared to the older ’œclassic’ style. 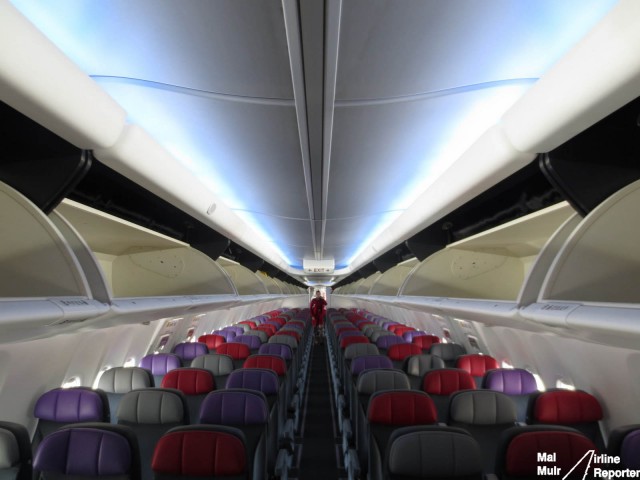 Though my trip was whirlwind quick, it was a big difference just to experience what it’s like to be a US traveler in Australia.  The different expectations of travellers, different practices of airlines and even the security is different.

One thing that is always a hassle in the USA is the TSA — none of that in Australia!  I could keep my shoes and belt on, no restrictions on liquids and even at Canberra Airport they had benches next to the x-ray machines so if you needed to take your shoes off for some reason (if they had nails in them or something similar) then you could sit down in relative comfort to remove them. 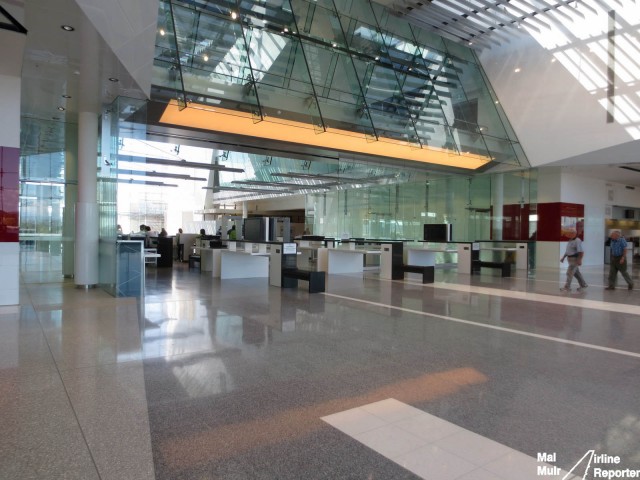 A quick trip home, re-qualifying for my Virgin Australia status and getting to catch up with friends and family.  Probably one of my most practical mileage runs to date! I cannot wait until the next.

NOTE: Even though the flight between Los Angeles and Brisbane was paid for by my employer (all other flights were at my own expense), the views in the above post are my own and do not in any way reflect those of my employer.

I see that you flew on the 777 from LAX to BNE, I will be doing that flight in December. I am wondering about the exit row seats, we are considering paying for the upgrade. Is there a lot of legroom? Where are the TV’s located since there are no seats in front of you? Also, were the seats able to recline?