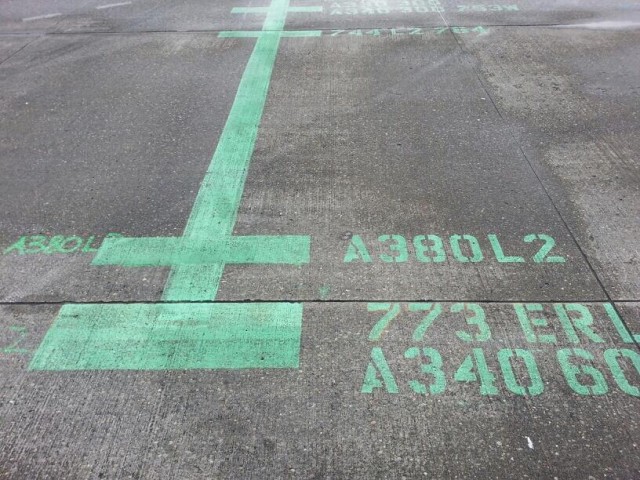 The ground is painted to prepare for an Airbus A380 at Seattle-Tacoma International Airport. Photo by Brandon Farris.

For most passengers, they probably do not notice the painted lines below the planes at the gate showing where the front wheel should be for different aircraft types. But for an AvGeek, it is always fun to see what aircraft a gate can handle.

Currently, there are no Airbus A380 aircraft flown into Seattle-Tacoma International Airport (SEA), but will that change soon? This week, three gates at the South Terminal had “A380” painted on the ground, but why? Sigh… turns out still no A380 service — for now.

“Yes, that is an A380 spot,” Perry Cooper Airport Media and Public Affairs Manager for SEA explained to AirlineReporter.com. “It is marked just for emergency purposes. That would be the space weâ€™d park it. We do have a couple of other spots marked for it in the cargo area.”

Perry also pointed out the the airport does not have the facilities, such as double jet bridges, to handle the A380 on anything more than an emergency basis.Â  The airport is planning on only having one gate prepared for the A380 and will be making the decision which one of the gates (S11, S15, S16) will make the cut. 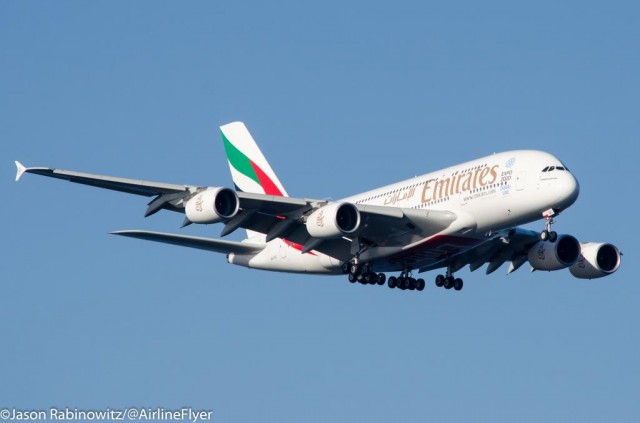 Will Seattle see an Airbus A380 someday? Photo by Jason Rabinowitz.

Currently, there are only two airlines operating the Boeing 747-400 out of Seattle (Eva Air and British Airways — and Delta starting later this year) and having additional opportunities to spot large birds is always welcomed.

Although short-term we will unlikely see an A380 flying out of SEA, that could change in the future. There are three airlines that operate the A380 and also fly to Seattle: Emirates, Lufthansa and Korean Air. If one of them would start A380 operations, but my guess would be Emirates. But at this time, the airport states that they are not in talks with any airlines on starting A380 service.

Seattle continues to grow with additional international traffic to Asia and Europe and I could see the demand for the A380 happening in the future.

https://www.airlinereporter.com
Creating an Interstate Highway System in the Sky
Video and Photo: New American Airlines Livery on a Boeing 767
9 Comments

On the 380 in Seattle gate markers. BA also flies the 380 with service starting this year out of LAX to LON. BA has had a 747 flight eminating out of LAX with a stop on SEA then on to LON. This could be flown using the 380.

I can’t wait to see BA’s new A380 product. Obviously, I would love to see A380 traffic to SEA, but I would hate it to be at the expense of losing on of three 744’s operating to Seattle. Swapping a 777 or A330 would be less painful.

What is live right now? LH and BR 747s? BA and DL sometimes.

I wonder how the loads on EK’s Seattle-Dubai route are doing? Don’t know if the loads will justify the A380 use.

From what I have seen to DXB is quite full. Back — not so much.

If there is ever the demand in SEA for an A380 to DXB, will have to do with Vancouver.

The route is still new and has time to continue to built up more demand. We shall see.

It’s unlikely we’ll see Lufthansa sending an A380 to Seattle any time soon, unfortunately. Air France couldn’t make its nonstop to Paris work on an A332 and I suspect LH is looking closely at yields on its A330s to/from Frankfurt. Who knows about BA. I think its use of 744s has worked for a fairly long time and they’re unlikely to mess with it so long as it’s profitable. Personally, I miss having SAS’s A340 nonstop SEA-Copenhagen service. Great airline.