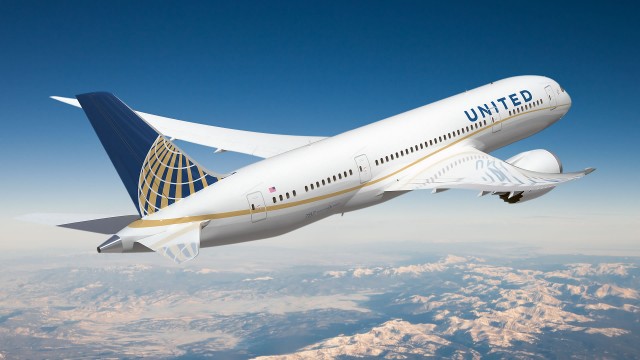 It is a slick looking livery, but a bit disappointing. I have been hoping from the beginning that United would do something special for their first 787. Although, I had a feeling that if they would do something special, it wouldn’t be radical, since the globe is a new brand for United and they wouldn’t want to cause more confusion about their brand.

The interior cabin will use blues and grays, which are consistent with the airline’s newer aircraft today. The 787 will also debut a new in-flight entertainment system that according to United will offer, “more intuitive browsing and more filtering options.”

To start preparations for the first 787 delivery, United has already installed a full-flight simulator at their Houston hub and has started training pilots,Â  flight attendants and mechanics. 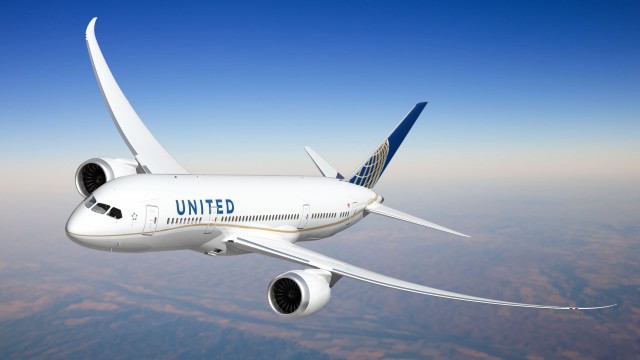 A front view of the special 787 livery for United. Image from United.

I also would have liked to see something a little more “out there”, but at least they did something different than the regular livery. This aircraft would look very slick in the Star Alliance livery.

You said it, absolutely disappointing. They could have done something like a slant off the old ‘Friend Ship’ livery and called it the ‘Dream Ship’. But, we shouldn’t be surprised. The lack of imagination that United/Continental have shown since their merger continues to manifest itself.

I hope they do a new ad campaign – Come fly the effecient skies!

The press release said it was inspired by Boeing’s livery because UA and Boeing have been partners forever basically. UA was the launch customer for the 777 and 767, and now the US launch customer of the 787.

I still hope they use the “Friendship” retro livery on more aircraft.

i think that plane would look good in the united livery before they merged with continental! im a Oneworld alliance person!!!!!

i think that plane would look good in the united livery before they merged with continental! im a Oneworld alliance person!!!!! this doesnt seem so special either!

So its…uh…the 1993 Continental livery except the beltline is a little squiggly and it says United. Living in northern New Jersey I’ve had ample time to get sick of looking at this livery in and out of Newark over the past 20 years. I hate it so much that I’m inclined to go to Kennedy or La Guardia just to avoid it. It’s a shame the final pre-merger United livery didn’t win out…it had much more character, and I think it would have lent itself to a more interesting “787 version.”

i agree im sick of that stupid livery!!!!!