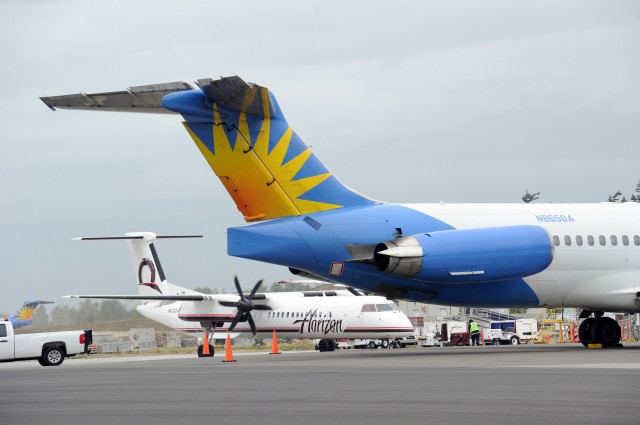 Horizon and Allegiant sit on the tarmac at BLI. Photo from the Port of Bellingham.

It is always fun when two airlines are able to duke it out at a smaller airport. Alaska Airlines and Allegiant have both been flying out of Bellingham International Airport (BLI) [located just south of the US/Canada border and about an hour and a half north of Seattle, WA] and the competition is about to get… well… more interesting.

BLI has been growing leaps and bounds over the past few years. From being a small regional airline to one that is handling more and more flights. In 2004, the airport saw almost 80,000 passengers andÂ  in 2011 that number rose to over 500,000.

Bellingham’s airport is pulling passengers from northern Washington and about 62% of their passengers are from Canada. It seems that both Allegiant and Alaska feel there is more demand, flying passengers to Hawaii.

Last week, Alaska put out a press release, announcing that they would start seasonal service between Bellingham and Maui (OGG) starting in November. This is interesting, since Allegiant previously announced starting non-stop service from BLI to OGG in November as well.

Although both airlines might not be too happy with the added competition, the airport likes providing more options to their passengers.

“The Port is very excited about the new destinations being offered by Alaska Air (Maui), Horizon Air (Portland, OR), Frontier Airlines (Denver, CO) and Allegiant Air (Honolulu and Maui),” Daniel J. Zenk, Director of Aviation at Bellingham International Airport explained to AirlineReporter.com. “Each new destination offers more flexibility and convenience at a low cost to our customers. The Port of Bellingham is proud of our partnership with the airlines and their ability to provide this service.”

Neither airline is willing to call out the other by name, but it is obvious that Alaska knows who they will be competing with. From their press release:

Alaska Airlinesâ€™ unique service offers many benefits for customers including: 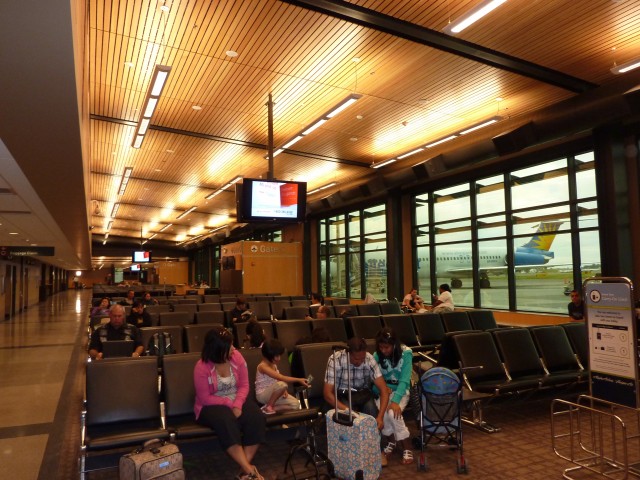 BLI recently opened a new terminal to help handle the increase of service. Photo from the Port of Bellingham.

See, Allegiant charges for carry-on bags, advance seat selection and drinks — they also only offer economy class seating. Even though Allegiant charges for these, the base-price for their flights will also most likely be cheaper and even after you add all the bells and whistles, they might still end up having a cost savings over Alaska.

Obviously, there is much more to choosing an airline than just cost and it will be interesting if cost or service will win out. Heck, there might be enough demand for both to succeed.

Allegiant is used to taking on other airlines and things do not seem any different in Bellingham. “The Allegiant business model is based on low-cost and value that stimulates new demand. This approach has led to 37 consecutive profitable quarters and will continue to help us grow,”Â Jessica Wheeler, Allegiant’s Public Relations Manager explained via email. “Our service in Bellingham has been very successful, and we are confident that all of our routes out of Bellingham will continue to attract new leisure travelers to our destinations.”

Alaska Airlines will start flying from Bellingham to Maui on November 8th using a Boeing 737-800, leaving at 3:00pm on Mon, Tue, Thu and Saturday. The return flight will be leaving at 11:00am from Maui on Tue, Wed, Fri and Sun. The airline will run the service through to winter until April 14th.

Allegiant will start flying from BLI to OGG on November 14th using a Boeing 757-200. At this point, the airline has not announced an official schedule.

Bellingham may be local to you. But your blog is wider than that. Now you’re going to have to expand coverage to any interesting story at all the smaller airline-served airports now. 🙂

#3 I realize that this concept of an Ultra-Low Cost Carrier competing with a more established airline happens all over the place. But Allegiant will be bringing 757s to the fight :).

#4 Is this your way of asking for a story on San Jose?

Hah! No, I actually expected others will ask you to cover smaller cities now because this story opened up the proverbial can of worms. It just seems inevitable since it’s Human nature that we all want to feel proud of where we’re from.

As for a story about San Jose, don’t let me discourage that. But I meant to say only literally what I wrote. This particular topic has already played out here anyway, where SJC already has competition between Hawaiian and Alaska to all of the islands’ airports large enough to support mainland flights.

I can handle open can or worms 🙂

I think a story on SJC when the 787 arrives will be a must!

This subject is actually interesting…a full-service airline and an ULCC duke it out in a secondary city. It’s part of the reason I read this blog.

David usually picks good topics. Every now and then I quibble…such as an ode to the DC-9 when there are 547 of them flying for US Airlines right now (I counted…I’m a loser). But this topic is good fodder for discussion, and interesting to follow.

LOL, the fact that you counted means you are a true #AvGeek 🙂

It will be interesting to see additional destinations as BLI grows. I could see Allegiant starting seasonal service to some Mexican destinations like PVR and SJD. Alaska flies direct to those destinations from Seattle but only seasonally.

With $9/day parking and cheaper tickets, BLI might get more of my business.

I live in Lynnwood, so it is still a good 1.25hr drive, but SEA can be that long sometimes with traffic.

No kidding! It might be worth it to drive up to BLI and get a cheaper flight than you could out of SEA. Maybe I should start considering it more often when looking for flights!

Just a correction. Kahului,Msui’s airport code is OGG. It will be very interesting to see who, if either, blink first.

You are correct. Thanks for pointing it out.

We’re going the carrier with the free water.

But what if the water is free, but your tickets cost $50 more?

A friend flew through there recently. The trip was with her family from the Bay Area to Vancouver. Flights terminating in Canada are considerably more expensive than BLI (and multiply the fare difference by number of travellers), than going to BLI and taking a car.

I don’t know how much of the YVR expense is market pricing versus underlying airport fees.

The reson flights are so much more in general from YVR in comparison to BLI is the TAXES!!! That is the killer purchasing in Canada. Also there is a SQ ( airport inprovement fee ) 20.00 cad.

I am curious to see how the pricing works out after both routes settle down.

AS has a great rewards program and G4 needs to get theirs going to better compete.

Ha! Bellingham. Been there countless times and truly love the area. However, without its proximity to the border, BLI woould be a joke that someone forgot to tell. Of course the regionals and specialty carriers use BLI for the tax and fee advantages; I’ve hears that some Canadian carrier actually bus pax from Vancouver to Bellingham and in bulk numbers. Why not? As nice as the Bellingham area is, it is is deciedly not a primary destination for the international passenger. It is a cost-saving measure for the in-bound and for the out-bound, most of who connect to other destinations. Bellingham has been very smart! They encourage the x-border passengers and limit their fees to the carriers in the hope that the modest fees will increase their volume. The year-to-year stats have proved them correct. I’d guess that their total ‘port’ revenue has increased along with the head count. Some folks (like me) really can get throuogh an airport without spending bucks, but most cannot. Bellingham’s traffic has added a LOT of revenue, both consumer and carrier to the area and they are loving it. It is ‘slightly’ inconvenient for both Vancouver folks and Seattle folks, but very often seriously worth the trouble. Let’s h ope that the city’s fathers (and mothers) don’t get greedy and shoot themselves in the foot by raising their various fees. They’ve got a very good thing going and I hope that they don’t screw it up. In the end, why does this work so well for them, but would not work in Seattle or Vancouver? They don’t rely on the short-notice business pax. The majority of their traffic is private-pay leasure travel, flying carrier like Alligent and others that provide the seasonal flights that the vacation packagers demand at a low cost. Not all, of course, but the leisure market makes up a half-ton of their pax count. And, as an airport that serves the budget, leisure market the flight schedules are far more accommodating. Few scheduled business pax to accomodate and the tourists will accept odd departure times to save a few bucks. Thus, a small airport can accomodate a lot more flights than one would expect. Those folks are SHARP.

Addendum: Thanks for fixing/updating your Blogroll list. The landscape has changes a LOT this year and most of the (interesting) links were either dead or close to it. Your readers won’t always agree with all of your selections, but at least the links are functional. Thank you.

In my long list of “to-dos” checking my blogroll sometimes goes on the back burner. Thanks for reminding me.

While it is true that Boeing no longer produces the 757 it was mainly due to fuel and costs. It is a much bigger aircraft with engines that are older than the 737-800. They are also not getting any younger with many reaching or further than 20 years of age which increases maintenance costs etc.