The airline passion runs deep in many people. Recently, I had the opportunity to e-meet Jack, who is a 16 year old airline fan that loves Continental and United Airlines. With the change over from Continental to United, a local Houston news station interviewed Jack Hardy and I really think it embodies many of our passions for airlines.

On top of being a certified AvGeek, Jack also runs the site, The United Airlines Fleet Website, which follows the most recent updates of United’s fleet. I asked him, via email why he became the AvGeek he is today. Here is his reply:

My earliest memory of flying, around age 4, was telling my parents I love flying. Ever since, I have been an airline aficionado with a particular love for Continental. Now I carry this love to United as Continental and United merged back in 2010.

I grew up watching Continental flights takeoff and land at Houston Intercontinental Airport (IAH). My neighbors worked for Continental, and they let me fly the Boeing 767-400 simulator at age seven. At age 10, I could easily tell you what type of aircraft that was flying over, and when I learned the fleet, I could tell you based on the tail number what type aircraft it belonged to.

As Continental and United merged, I have taken my love for Continental and transitioned it to United. While I may not fully agree with everything that has occurred in the merger, I thinks it’s great that United is now the World’s Largest Airline. Also, that my home airport is the largest hub to United.

After finding out that I was too young to get a summer job with an airline, I started the United Airlines Fleet Website. The website is dedicated to tracking each of the 1,314 aircraft that are flown by or for United. The site covers delivery year, aircraft number, type of entertainment, power, seat type and seat maps for each aircraft in the United fleet. 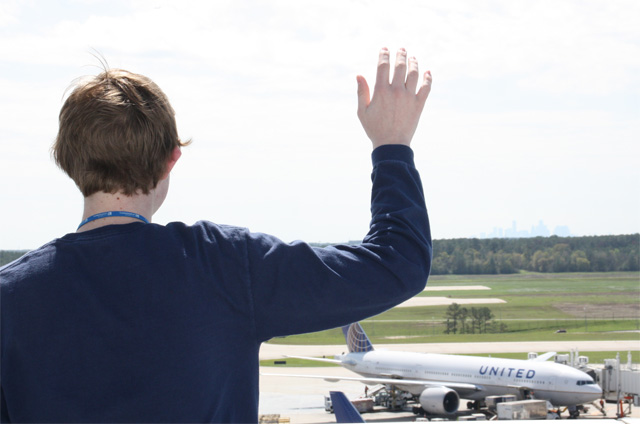 Jack waves to the last Continental flight (painted in United livery) to IAH. Photo from Jack.

The site is also dedicated to providing excellent customer service by answering all fleet questions and suggestions for improving the site. Every day it gets better and on June 16th the site will have a complete new design based on what people have asked for.

When I am reading all of the comments about the site, I cannot help but smile as I am only a 16 year old who runs what I call a priceless United travel tool.

Someday, I want to be a CEO or a Customer Service Director for an airline; as I want to restore the magic of flight

Wow, he sounds exactly like me. Im 19 and loved Continental as I am also from Houston. I too watch the planes land from Lee road and have had the oppurtunity tomfly a 737-800 simulator. I’ve also been ale to tell airliner from airliner since I can remember. But ive also had a special spot in my heart for Continental along. You arent alone Jack. Theres still a few of us out there that are die hard Continental fans who love the ins and outs of the airline. My dad always consults me about what the best aircraft type is for all of our flights. Last week i experienced the sky interior first hand and it really is impressive. It will be even better once they get economy plus and directv. I am excited to try channel 9 on a legacy United plane! Perhaps i’ll see you around lee road watching them touchdown on Rwy 27!

I am so proud of jack. This is the same passion I had and now i am a flight attendant. I am from Houston and Continental would hold a special place in my heart forever. I still have my hold back on the merger. Jack do not stop doing what you do.

I was like 95% positive the last flight using the Continental call sign was PVG-EWR (UA86 I think) and the last flight before the systems completely merged was PHX-CLE. By what benchmark was NRT-IAH (UA6?) the last?

Someone ought to warn United that this young man is on his way IN and UP. The brand could use a few more with his passion and loyalty – and more power to him! His fleet database is impressive.

Since when did ORD become Houston? And since when did CO’s ugly livery count as being a “United livery”? Because they slapped “UNITED” on it and $mi$ek says so? Not in my eyes. $mi$ek’s vision for destroying United Airlines may be gleefully enjoyable to the Continental fans who have hardly lost anything in this merger and have pretty much had Continental continue on unjustifiably, but for loyalists and fliers of the TRUE United Airlines, not COdbaUA, this merger is a true travesty. I share the same passion Jack has, but not for Continental. I grew up around United. The first plane flight I ever took was on United. The sight of seeing a United plane take off at an airport, especially in the Saul Bass livery with the orange, blue, and red stripes with the giant Tulip on the tail was a truly splendid experience. Seeing United planes lined up at the massive hubs in Chicago or Denver was just awesome. This airline was the largest in the world and one of the most innovative, too. Being on a United plane, with the friendly United flight attendants who would give out the little wings and trading cards, was an awesome, comforting experience. Seeing the United Airlines I knew and loved disappear with each passing day truly hurts. I am far from alone in feeling this way, and it hurts seeing the hard working men and women at United Airlines see their airline further degrade due to poor managment, especially after they have lost so much in the Bankruptcy and the post 9/11 world.

I have absolutely ZERO passion for the “new” United, better known as COdbaUA. Maybe it’s because I absolutely despised Continental with every ounce of my soul before the merger. Maybe it’s because their hideous, outdated, piss poor branding and livery is replacing wonderful works of art by the legend Saul Bass who created the iconic Tulip and the Pentagram branding firm responsible for UA’s branding before the merger and the stunning and modern Rising Blue livery that was trashed by $mi$ek. Maybe it’s because the egotistical, arrogant, two-faced CEO of Continental, Jeff $mi$ek is literally destroying the reputation and name of what was once the most one of the most prestigious and well-respected airlines in the world.

Whatever it is, the United I know of is gone. The aviation world truly lost a great airline. I pray and hope that she will someday rise from the ashes and soar the Friendly Skies once more, perhaps when certain dirtbags leave and pull the chords on their golden parachutes. Hopefully they don’t open either.

Trust me, most Continental fans feel like we’ve lost our airline in the merger.

First pic is at ORD, not IAH.

That is my fault, not Jack’s!

Well Kit, tell us how you really feel. No need to hold back…;-)