Do you own an older Boeing 747 and are looking to improve the way it looks? Does your upper deck just look so small compared to the 747-300, 747-400 and especially the 747-8I? Well, do not worry… Boeing has a deal for you: the 747 Stretched Upper Deck (SUD). Well, I guess Boeing had a deal for you, since they aren’t in the business of doing this anymore.

The SUD gave airlines operating older -100 and -200 747 models, the ability to stretch the upper deck and increase the number of passengers flown. When plane spotting, it is typically easy to tell the difference from a 747-100/200 and the 747-300 by check out the stretched upper deck, but the SUD makes it a bit more complicated. 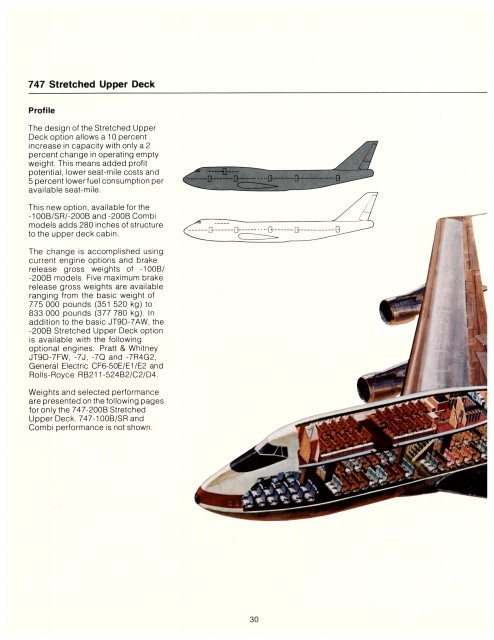 CLICK FOR LARGER: Information for airlines on the Boeing 747 Stretched Upper Deck. Image from Boeing.

From the image above: “The design of the Stretched Upper Deck option allows a 10 percent increase in capacity with only a 2 percent change in operating empty weight. This means added profit potential, lower seat-mile costs and 5 percent lower fuel consumption per available seat-mile.”

“Weights and selected performance are presented on the following pages for only the 747-200B Stretched Upper Deck. 747-100B/SR and Combi performance is not shown.” 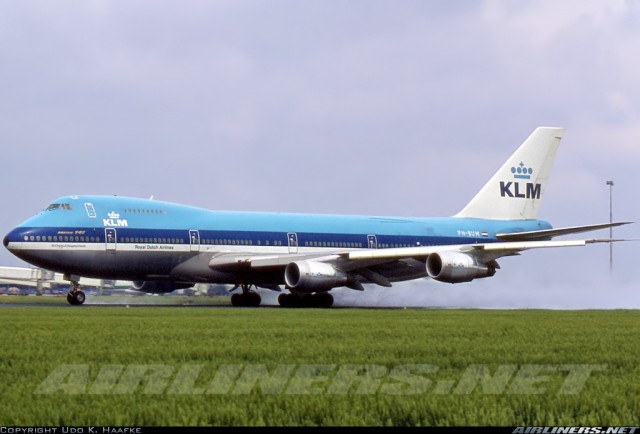 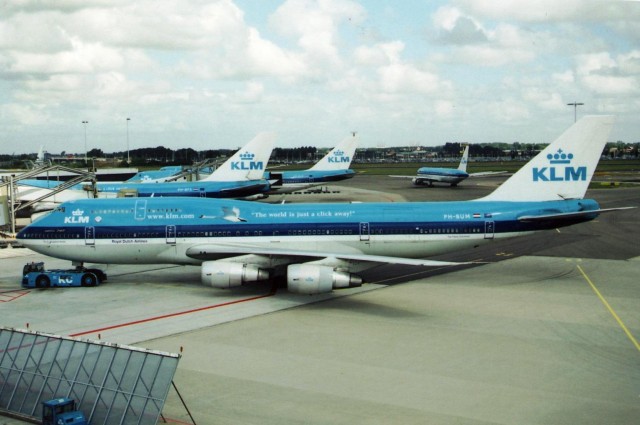 http://www.airlinereporter.com
Airline Livery of the Week: Air Pacific
How is the Boeing 737NG Different From the Classic? Guest Blog Part 1
17 Comments

Any Idea how many were done?

I think those are the only ones …

would these 2 AF aircraft be part of the fleet of UTA planes taken over by Air France when the french government arranged the take-over ?

Hmm. I had no clue that some 742 airframes were still in scheduled PAX service with ‘major’ carriers – like KLM. They must be a huge load operationally and for maintenance. And, if I’m not mistaken, the 742s still require a 3-person flightdeck crew, that poor old engineer sitting at a right ange to the rest of the family. As the previous commenter asked, do you have any idea about how many of these conversions were done – and how many remain in service? As an aside, my first 747 experience was a 741, Paris to Chicago and back, winter of 1972 – I think. Both directions made their major pit stop (fuel, cleaning, catering, crew change etc.) in Montreal (might have been Toronto, but I don’t think so) before continuing on. On those birds, the small, unmodified upper deck was a First Class lounge with a small bar; no regular seating. Through some special arrangements (decades before 9-11 and that I won’t talk about) I was able to spend most of both flights in a cockpit jump seat. It was a lot of fun! I also recall that, short of take-offs and landings, the Engineer (SO) did most of the in-flight work. Again, I’m very surprised to learn that the 742 is still in active PAX service with major carriers. -C.

KLM don’t have any 742s still in service. Biman Bangladesh or Transaero are the easiest way to catch these birds.

Did any other airlines besides KLM convert any 742s to the SUD design?

I read somewhere that the aerodynamics of a SUD give a slight increase in airspeed over the standard upper deck. Anyone know if this is true?

Nice post on An Inside Look at the Boeing 747 Stretched Upper Deck (SUD). Here i am providing good information on all airlines companies history, phone number, call center number, toll free number, baggage fares, check in and more in “AltiusDirectory.com”.

Correct though the -400ERFs have been leased to Martinair and -400K should be -400M: http://en.wikipedia.org/wiki/KLM#Fleet

I believe there is a US carrier called Baltia starting up right now with -200s to Russian, Latvia, Ukraine, and Belarus. It’ll be interesting to see how it goes if/when they get FAA certified for scheduled passenger service.

Yup — they have two Boeing 747-200s. Now will they actually fly passengers is the question 🙂

That’s exactly the post where I found out Baltia existed. I’d love to see it happen, but it’s always interesting to see whether the plans come to fruition.

Very cool mod! I wonder why Boeing didn’t try that way back in the early 70’s?

Didn’t SQ have the first DID aircraft back in the 80s? I seem to remember flying on one in 1985 or thereabouts.