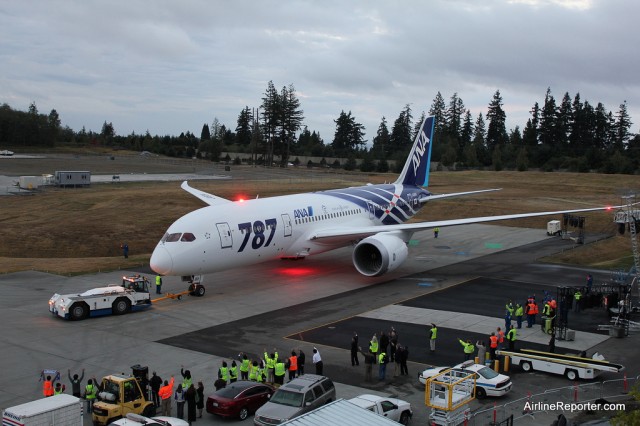 Mr. Shinichiro Ito,Â ANA Group President and CEOÂ said,”We are very pleased to announce the launch of long-haul international services from Tokyo to Seattle. This city is an important destination on the U.S. West Coast and is home to companies such as Microsoft, Amazon, Starbucks and, of course, Boeing itself. We are confident that passenger demand to fly to Seattle will be high, not only in Japan but other Asian cities.”

“We are very pleased to announce the launch of further international Dreamliner services to these two new destinations on the west coast of the United States,” Shinichiro Ito, President and CEO of ANA Group stated in a press release.”Â We will make full use of the efficiencies of the 787 as well as capitalizing on our close relationship with United and Continental Airlines to enhance the competitiveness of our joint ventures with these two Star Alliance partners.”

Fantastic! I can’t wait to see it.

We can recall AA had 777 service SJC-NRT for almost 20 years until after the dot.com crash. This 787 might just be a perfect fit for Silicon Valley and that airport.

But just 40 miles north SFO offers service to Japan too.

Right in between your guesses. American ended its NRT-SJC service shortly after celebrating the 15th anniversary of the route in 2008.

Are you sure they are doing direct flights from SJC? Are the runways long enough for a fully loaded and fueled 787?

On page 24 of Boeing’s guide (PDF) you can see the runway length requirements. SJC is 11,000 feet which rules out many of the take off weights.

I don’t have time to read through a 100+ page document right now. But other relevant info can answer the question. American previously flew SJC-NRT nonstop with MD-11’s and later 777-200ER’s, when San Jose/Silicon Valley (as AA called the airport) was their West Coast hub. Since the route was flown daily by larger 777-200ERs, the 787 is undoubtedly fine on the route.

Don’t forget that at many airports there is some kind of operational restriction of some kind, not just runway lengths but also engine-out contingency plans to clear nearby obstacles/terrain. The airlines always figure that into the load to fit the required safety margins. It does not stop an airline from serving an airport if there are some restrictions like that.

Some history on the route… When American started the route in 1993, they briefly used DC-10’s. At the time, SJC had one airliner-length runway (30L) of 9600′. The DC-10’s could not do that nonstop with the runway length, and would refuel in Oakland. Soon after that, AA got MD-11’s which were able to fly it non-stop. SJC lengthened Runway 30L and then 30R both to 11,000′ in 2000 to support the transpacific flights. American changed the aircraft to 777-200ER’s by then too. Of course, Sept 2001 was a blow to airlines and airports, which ended that period of expansion. American canceled the SJC-NRT route in the fuel price spike of 2008, just after celebrating the 15th anniversary of the route.

With ANA’s announcement, just about all the routes American abandoned at SJC have now been picked up by more profitable airlines. With the lengthened runways and a new terminal opened in 2010, the airport has more capacity than before for transoceanic flights.

SJC is actually my local airport and I flew out of there frequently (not so much these days). I did find Boeing’s docs on the 777-200LR which definitely can’t use SJC all the time but that is unsurprising as it is a flying gas tank.

We also don’t know what ANA are doing in terms of plane weights (eg number of seats, types of cargo carried).

We actually do know how many seats are going to be on the plane. ANA has configured their 787s with 46 Business Class/ 112 Economy Class…

I suspect the numbers you were looking at may affect a 787 flight from San Jose to Perth but not Tokyo.

Great News! With tongue firmly in cheek, this is also a great way for ANA to get the broken stuff fixed a little faster. No suggestion of any fault, the 78 is a wonderful airplane and then some. Still any truly NEW airmachine IS going tohave bumps, it is a rule. Flying some of their fleet to SEA for a while is a seriously smart move for ANA, if the projected traffic is semi-close to what they project. Mother Boeing is close and she will hold ANA’s hand until they understand how to use this new machine. Smart move by ANA – IF… they can achieve at least a 50% load factor, most of the time. ANA is the Guine Pig and there will be some bumps, I promise. In time and with a few more deliveries, the 78 will prove itself as the machine that Boeing promised, t hose years ago. We Ain’t there yet, but it will happen. -One with faith…

Dreamliner is surely becoming iPhone of aviation industry. It might just attract extra passengers to the airport from where it flies.

Everytime somone questions the runway lengths at SJC I just show them all the photos and videos of 747 visits. United, Northwest, Delta, and Japan Airlines have all flown 744s in and out of SJC. Not to mention the frys 747SP. Theyre long enough

I Work the ANA flights every day. The 787 is planned to start in Jan 2013.
The 787 will be able to land at SJC. The landing gear boogie can be configured for take off on shorter runways!