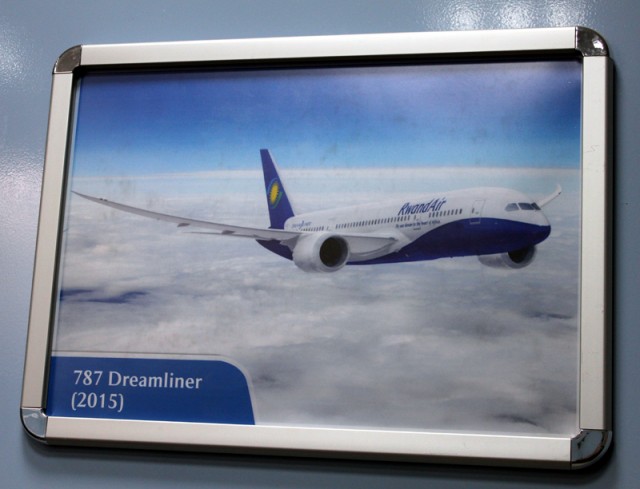 Interesting plans, they may seem a bit optimistic but I like Mirenge’s vision. Good luck to you RwandAir with the growth of your airline. Your plans sound exciting. Nice coverage, David.

Rwandair is optimistic and very ambitious the good thing is everyone at the airline working towards that optimism and ambition. Great companies have been like that….i am sure Rwandair will get there too.

It is true. There is a lot to be said about motivation and having a positive outlook.

This smacks, a lot, of payback to some backwater airline that gave David a free ride to Africa and back. They give you a free trip, and you give them some pub in the blog.

EVERY airline has plans of becoming a major hub. But one in Kigali, Rwanda?? And I’m sure that Air Togo and Andorra Airways International would love to fly a bunch of 787s too…but is RwandAir any closer?

Ask yourself yourself one question – would a blog author have a story like this in a blog if they didn’t just get a free trip?

Seems like a lack of journalistic integrity there, David.

You can assume what you want John about my writing, but this is much more than just a backwater airline that got a new Boeing 737. They are a nation of people who have been through some pretty difficult times and it is quite amazing where they were 15 years ago to purchasing a new Boeing 737 and looking to growing a fleet of large aircraft today. What other airline is operating a few used CRJ200s, B737-500s and a DASH 8 are seriously looking to operate a few Dreamliners? It is a pretty big deal and I do not think they are just saying it to say it.

I feel very privileged to have been on the ride and learn more about Rwanda. I have a 3-part series to be posted in the next few weeks that I hope can explain a bit more about this being much more than just a plane.

I am very open about what I get free and my trips. You would be surprised what other legacy media folks get for free and are not so open about that. I like to think being honest has a bit more integrity than people that do not talk about that fact. I also do not hide the fact I concentrate on the positive parts of the airline business, and for airline geeks out there, this is very exciting news.

A free flight to Rwanda (Rwanda!?!) that required 6 major inoculations in the ass the week before. Definitely smacks of payola.

Only 6 to the arms and Malaria pills that made me sick every morning. Not to mention a 20hr flight over there in economy and 30 hour trip back home in economy after only staying for a few days :).

But I love that stuff.

As far as how far they have come, the money used to buy these jets has come from mineral exploitation of the DRC and murdering thousands, if not more (see the UN Mapping Report). 90% of the people are at subsistence or lower levels while those in the elite and manage Kigali say “Let them eat cake…”.

Were you free to travel the country without a handler? Could you go wherever you wanted?

This is a darker flipside of the Genocide, worse than the regime in power before. The country was racked by the IMF devaluing the Rw Franc by half, a crash in the export prices for coffee and tea, the invasion by the current government forces that put 3 million Rwandans on the roads. THEN we just found out recently, it was the current president of Rwanda that ordered the downing of the former presidents plane that sparked the Genocide.

We have a lot more to this recovery that meets the eye…Theft on a massive scale, persecution and repression…Fly the Friendly skies of RwandAir

I think you might be very mis-informed about what Rwanda is today. I was free to go wherever I wanted, whenever I wanted and speak with whomever I wanted with no escort. I never felt afraid for my safety, even while carrying around about $3,000.00 of camera equipment with me. Something that cannot be said while in many other African countries.

Rwanda is a landlocked country and air transportation is vital for their growth.

You are stating a lot of things that have nothing to back it up.

You mean the Mapping report by the UN is not “backing this up”? The thousands of refugees that are afraid to return and those who have been assassinated don’t matter?
The historical facts are there for you to see, if you want to.

Sure, Rwanda is safe for people traveling there. It’s the people who live there that are in fear…

The push for outside investors only helps the elite at the expense of democracy. It’s not always about money.

See this Wikileaks document related to your airline story for one instance:

The genocide happened about 15 years ago. Of course there are still going to be issues steaming from that — how can there not be? But a country to go from such poverty and lack of education to now building a real infrastructure in their nation? That is pretty amazing. Compare that to 9/11 happening ten years ago in the US and we haven’t even re-built the area.

No one is saying Rwanda is perfect, but they sure are heading in the correct direction, especially compared to other African countries.

David,
Yes, it was 17 years ago, but Rwanda’s continued theft and disruption of the DRC continues to this very day- hence my mentioning of the UN Mapping Report.
They are also currently forcing refugees to return and in 2010 the government has jailed or disappeared a lot of people. A country who votes a 93% majority for it’s president says a lot.

Your assumption of the miracle of recovery is akin to saying Italy was OK with Mussolini because the trains ran on time.
If you want stability at the price of rights, sure, it’s a great business environment.

@Scott, hello everybody……. Just a question to Scott -why do you talking about DRC? Here David talking about his trip to Rwanda and Rwandair.

Hi there,whoever said that Rwanda looted minerals to buy planes,should really be ashamed of themselves,if Congo has had those minerals for more than 300 years,why cant they also buy or be in the news of buying the planes,another thing is the mapping report of the UN was thrown out by the security council for not being authentic,please let us Rebuild With Africa and Never Divide Again (R-W-A-N-D-A).

Scott, you have your own issues my friend. U might need to cross check and verify what you are saying,because, clearly, you got that from someone else.
It is always wise to compare different versions of story and history.I sincerely hope that you are neither Rwanda, nor Congolese, you are such a shame to both nations, and you don’t know what you are talking about.
STABILITY AT THE PRICE OF RIGHTS….what does that even mean? Ridiculous.

Scott,
Pse come to Rwanda in order to address your prejudices. Otherwise you sound so ignorant about Rwanda.

The 787 was designed to be the first production airliner with the fuselage comprising one-piece composite barrel sections instead of the multiple aluminum sheets and some 50,000 fasteners used on existing aircraft.