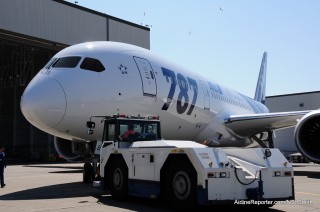 ANA's first Boeing 787 Dreamliner to be delivered on September 27th.

Sorry folks, I have to be lazy and copy and paste directly from ANA’s press release:

ANA’s airplane will arrive in Tokyo on Sept. 28, following a Sept. 27 departure from Everett, Wash., and will be greeted by ANA employees, media and Japanese partners. Details of events in Everett and Tokyo will be provided in the weeks ahead. Many of the events will be webcast live, allowing people around the world to participate in the celebration.

Shinichiro Ito, president and CEO of ANA Group, said, ’œAs launch customer, we are delighted to be taking delivery of our first 787 Dreamliner. This aircraft will enable us to offer new standards of service and comfort to our passengers and will play an important role in our international expansion strategy as we seek to become Asia’s number one airline.’

ANA launched the 787 program with a record-setting order of 50 airplanes in April 2004. The airline has played a key role in guiding the design of the Dreamliner.

Hopefully you’ll get back in time to ride on that one!

I’d like to know the web pages where i can see the celebration! ThankYou.

I will be the first class passenger of this airline,hope gonna win the euro-million this tuesday,so i can fly with my first flight from tokyo to sydney,all is possible by God.