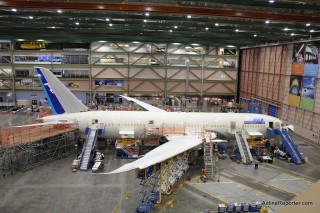 Fun (or funny?) news. Both ANA and our friends at Boeing have been playng th word dance game for months, often stretching the use of of words even father than some of the blog world’s worst writers. In this case the stretches come from ANA (and Boeing) and I wonder… Just how far can one stretch the optimistic gradeur, before a physical, functional, operating airplane is finally delivered to ANA? We’re stretching dental floss these days and the human hair is next. Ha! To their everlasting credit, the Boeing Commercial Airplane Company will not turn over the keys to any 787 until said airplane is ready for revenue service and in every respect. The wonderful team at Project (787) Delivery are very bright, talented souls. The first service airplane will stay on Boeing’s ownership list until *every* member of that team is satisfied that *everything* is right. That has been Boeing’s way with all jets and the entire corporate culture demands another in-service success. Sure, BAC has had a few bumps with this new, high-tech airplane. The folks at BAC know their business and they do not cut corners. Go Boeing! Keep on doing it right. Those hats and stickers that say, “If its Not a Boeing, I’m Not Going,” are not a joke. I wear one with pride – and I’ve never worked for them. Go Boeing!! -C.

Great news. It looks like the Dreamliner will formally enter service in October!

Let’s hope. I am not holding my breath, but I have a good feeling about this one!