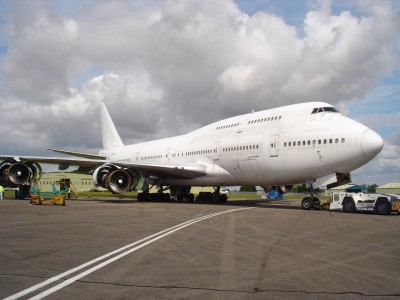 https://www.airlinereporter.com
An Inside Look at American Airlines Admirals Club at San Francisco
You Gotta See This: Ice Pilots on National Geographic
16 Comments

Wow, really sad to read this story. But, all three models have served well for several years. I definitely hope to see more airlines picking up the 747-8 as 747-4s reach the end of their useful life.

After some thought, I do not see this as ‘sad’ at all. Rather, it is part of the evolutionary process since more current airplanes have replaced them. Ninteen or twenty years may sound short, but Air France is a long haul carrier and has learned to squeeze the best possible utilization from their ‘heavy’ aircraft. It is more than reasonable to believe that these first three GITA, B and C, were simply worn out.
**Attention: Airline Reporter, David** If you can find the details, I would like to know the Total Hours and Cycles achieved by these three airplanes. The cycles may be on the slow side, but I’ll bet my famous nickle that the Total Hours on each of these three airplanes was extremely high. (If I knew where to look, I’d do it myself.) Thanks.

If I knew where to look, I would tell you as well. I bet you are correct — we would find total hours to be high, but cycles to be lower. I tried to reach out to Air France about the 747’s, but haven’t heard anything back yet.

Thanks for trying, David.

You would think the cargo airlines wanted these planes for haling cargo around the world.? But who knows. They scrap 747-400 and yet we have DC 8 & 9’s still flying cargo and passengers. Wow what a crazy world.

N185UA is in Arizona getting broken up as we speak, if not broken up already.

Please advise as to who to contact to purchase a 747 fuselage prior to scrapping. Appreciate it !

It’s for the best, the frame is worn and has seen to much action. They will tear them apart with huge diggers!

Any idea of what the number on the nose wheel compartment was? I flew most of NWA’s 400’s on the way to Bangkok from NYC or Detroit, and always took note of those numbers. Recently saw a video of A Delta landing at Narita and it still had the old NWA mumber.

Note quite correct Air New Zealand sent the a 747-400 ZK-NBS to Roswell, New Mexico be scrapped in June 2009. This predates the AirFrance planes by nearly 6 months.

I was an assembly mechanic on RA 1, and worked on the first 11 a/c before going into the service and Vietnam where I patched bullet holes in airplanes. Returning in 1974 to the 747, later 767 startup, and then 747-400 as a production supervisor. Retired for 16 years, I will likely see the last 747 built. First to last! We should have a celebration honoring the “Queen of the Skies.”