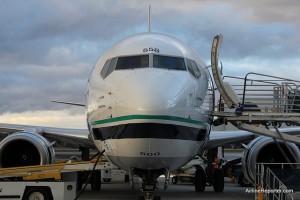 I did my best. Three hours late. Full. But it worked. I think it was my blue polyester that did it! Appreciate your confidence.

I think this shows some shortsided thinking on the side of Alaska Airlines. Do they not have an alternate Data Center that they can run their systems from? Have they not learned from 9-11, and most recently the earthquakes and devastating Tsunami in Japan that there is the possibility of losing a whole data center. What would happen to Alaska Airlines business if they lost a key data center. I think this shows they are not prepared. Hopefully this is a wakeup call they need to move forward and invest in the people and systems needed to be fully redundant.

I think they were actually in progress of making a back up system when this happened.

The point I am trying to make is they shouldn’t be just making a backup of their system.. it should be there already. They should be able to run from either site at any time. This shows they don’t have that capability. Hopefully this gives them the wakeup call to make that happen.

This shows they donâ€™t have that capability. Hopefully this gives them the wakeup call to make that happen.

Would love to see the likes of Qantas and Virgin Blue in Australia do the same. The last 2 times Virgin Blues system has gone down, it’s always someone else’s fault with no real communication to the passengers. Oh well…