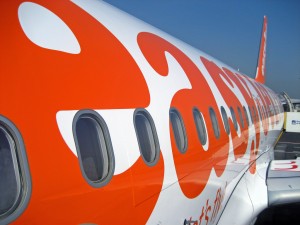 easyJet has a pretty slick livery, but soon their paint will be slick too.

Every little bit of efficiency can turn into big bucks for the airlines. Either by saving a little weight or making the aircraft more aerodynamic, airlines with large fleets can end up saving a lot of money. easyJet is trying a different kind of paint on their planes in hopes of saving the environment and passengers money (well more profit might be a motivating factor in there somewhere too).

The new paint weighs less, fills in imperfections on the aircraft’s surface and reduces debris build up on the aircraft, increasing the aerodynamics.

easyJet has a large fleet of the Airbus A320 family. They have a total fleet of 194 airplanes, most of which are in the A320 family. The airline is hoping for fuel consumption to be reduced by about 2%. That can add up to huge numbers across the entire fleet.

Although this paint technology has been used on US Military aircraft, easyJet is the first commercial airline to use it on their aircraft. They have eight airplanes currently in the new paint and will be testing it for the next 12 months to compare the fuel savings. If successful, they will evaluate if their entire fleet should use the new paint

easyJet’s chief executive officer Carolyn McCall said, “Efficiency is in easyJet’s DNA. If we can find new ways of educing the amount of fuel used by our aircraft we can pass the benefits onto our passengers by offering them low fares and a lower carbon footprint.”

If the paint is found to be more efficient, I can only imagine more airlines around the world will start using it on their aircraft.

Source: Daily Mail via Today in the Sky Image: WexDub

Less weight paint programs are not new to the A’lines and they certanly understand and consider the paint volume when they design a new livery. However they do it, let’s hope that they get the OLD paint off, before applying the new.
As for copying the military’s paint scheme, Ouch! Let’s be a little careful about what we say here. The military services have a variety of paint schemes and those folks consider a whole lot more variables than do the commercial carriers. A lot more. While weight and a slick, less resistant surface may be important fuel savers for the commercial operators, some military airplanes have far different objectives. Nuff said and perhaps, just mebbie, a smart blogger would think this through before posting. Sometimes it is a good thing to NOT post some details you may learn. Think first, think again and mute -or just skip – a few things that you may learn. While there is probably no real harm in the current post, please consider a bit more before you post some details. For better or for worse, your blog is read by far more than Flag-Waiving Americans. Please, think before you write. Thanks.
-C.

If flooding is caused by dirty water, which is water contaminated by pathogens, sewage and chemical waste, the items it comes in contact with must be professionally
cleaned and sanitized or tossed altogether. A friend
repaired her damaged hardwood floor and it had to
be redone three times. So many populations are affected all over the world.