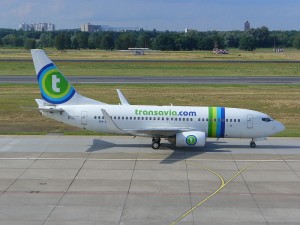 Image: Per aspera ad Astra
Airline LiveryLivery of the WeekTransaviaTransavia.com

https://www.airlinereporter.com
CLASSIC VIDEO: Western Airlines with William Shatner and Leonard Nimoy
Aviation in Seattle: An Inside Look How the Museum of Flight Restores Their Aircraft
11 Comments

HV has subleased planes to SY since 2002. SY has even sent a plane to AMS to help them out. IIRC they, (SY) has 2 HV planes currently for the winter.

How about doing on story on SY. I think of them as the little airline that did. I am ex SY employee.

Thanks for the information. I would love to do a piece on Sun Country, but they seem to be one of those airlines that don’t communicate well. I have tried to contact them via multiple ways with no reply. If you still have some inside contacts… 🙂

Robert is correct, you can currently find a couple of their 800’s flying for suncountry. I see them in Denver every once in awhile they go msp-denâ€“ifp and back. Robert did you used to work in DEN?

I don’t particularly like this livery but that’s my preference. 🙂

“This airline is sponsored by the Letter T”

Its a pity your photo is of a 737-700, most colour schemes are better on a longer aircraft, in ths case an 800. In the Netherlands, this livery is generally described as the cigar wrapper. Transavia’s best livery was back at the beginning of the ’70s when their green and black design, as Drew says, emphasising the letter T was innovative. Unfortunately this worked on their Caravelles and 707’s but not on the 737-200’s which replaced them. The colour schemes during the last twenty five years have been relatively simple to make repainting easier when leasing.

Gee, and all this time I thought Twitter had started an airline. Darn!

I actually like the white one (though the photo supplied with the blue livery is pretty, too). The stripes on the fuselage are fun!

It’s interesting to see all the different liveries – and the absolutely amazing diversity in airlines. Just amazing.

I used to fly them from Rotterdam to Stansted (London) & Linkoping (Stockholm) in 2003/04. They operated as Basiq Air, but dropped that brand soon after.