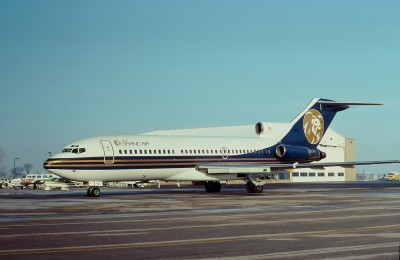 Talk about uber First Class accommodations — if you wanted to be somebody, you would fly MGM Grand Air. The airline first started in 1987 as a VIP charter using a fleet of DC-8s and Boeing 727s. Then it added a schedule service, flying only from New York to Los Angeles offering only First Class seats. Really, saying “First Class” almost does the airline shame. The Boeing 727s would only have 34 seats, a full bar and chef on board.

In 1995, due to slipping sales, the airline was sold over to Front Page Tours. After changing hands for a bit, they changed their name to Champion Air and served as a charter until they went under in 2008.

Even after almost 24 years after the airline first flew, I think this livery looks classy. I couldn’t imagine what the livery must have looked like during the 1980’s. Although many others have tried a First Class only airline between LA and NYC, very few have ever succeeded or have reached the level of MGM Grand. Check out a first hand experience of flying the airline from someone on the website FlyerTalk.com.

Any airlines still flying the mighty 727 is a class act in my book! Vintage is the way to go! Just ignore the cost of aviation fuel. 🙂

Many years ago, through a friend who flew for MGM Grand Air I had the opportunity to visit one of their 727-200 AC (ground only) at LAX. While “Pivate Terminal” is a stretch, their cornere of the West Imperial Terminal was wll appointed. At the time of my visit, this 727-200 had been in service with MGM-G for a bit over two years. Yes, it was truly Grand! What stuck me was the cabin’s cleanliness and polish. Even after two+ years of service, everything, even the cracks and cervaces were spotlessly clean and everything tested actually worked. It was a very fine airplane to be sure. So, they finally went belly-up. Nitche services are like that, but MGM-G dod have a nice run. WIth only 32-34 PAX seats, the weights were low and that saved them some fuel. Still, the 727-200 was a gas-hog with any load. I’m sure that fuel costs contributed to their demise. Also (as far as I know) they never charged more than standard First Class rates for their tickets. There is still a market for folks willing to spend big bucks for their flights, but these days they have more options: Shared ownership of a BizJet, NetJets amd the similar, as well as ‘ordinary’ F.C. on the regular carriers. The cost of moving the principal individual from A to B remains about the same, but goes through the roof when their staffs’ and attendants’ seats are considered. That’s when NetJets and similar can become attractive. I’m sure we will see more of these high-end specialty carriers in the future, but they will probably use smaller airplanes. One thing is certain: If they operate a scheduled service, they will continue to skim the cream, probably flying only between LA and NYC, perhaps using second string airports. Well, it WAS a darn nice airplane and the cleanest that I’ve ever seen.

MGM was truly a grand airline. I was a senior Flight attendant for them back the mid 90’s. The jet had 32 to 34 seats. the love seat in the middle of the jet near the bar was very seldom used. the cool thing was the four state rooms, each sat 4 with 2 sets facing each other. A table was put up for dining and if you wanted to sleep,the seats pulled together, the backs went down and it turned into a queen sized bed. there was a TV on both walls of the room so you could watch a movie from any view. there were alot of celebrities, most were very nice and some (sports persons) could be asses. Like most jobs, flying for American, United etc… where the top jobs and most looked down on the smaller airlines. But when an MGM jet pulled up, all those F/A’s would run to see the inside of the jet or who was comming off. The only time I didnt feel like I was king of the hill was when we had a 12 day trip with the press corp.and we had to follow Airforce One with Clinton on board around the country. When we landed at Andrews Airforce Base and sat on the tar mat, the doors to a very large hanger opened and out rolled Airforce One. Wow! how humbling. For 12 days we would fly to an airport that was closed a half hour to an hour before we landed, pull up to the FBO station and Airforce One would pull up next to us and the president would come out. coool. Did get to meet the prisident and was invited on board Airforce One 2 times. Sure dose take the wind out of your sails whe you walk on board the King of all jets and everyone is talking to their wrist ( secret service keeps there mics). That trip was on one of the DC8-62’S. It had 75 sets an 2 state rooms. I have alot of great memories of MGM and the other airlines I worked for and alot of pictures from all over the world but at MGM I was “KING OF THE HILL”. Happy Flying!

Ahh.the salad days of being an exec at MTV Networks from 1985-1995. We were allowed to take MGM Grand Air from, I believe, Teterboro.It was not uncommon to see Diana Ross, Terence Stamp and other celebs on the flight.Then again, I miss the 8AM TWA flights out of JFK to LAX. Now, we fly on buses, people wear sweatsuits, think of F/A’s as waitresses..Bring back the good old days.though I always search for bargains these days.lol.I “just” tossed my MGM Grand FF card.Yeah.should have saved it but too much clutter.lol. Thanks Arnold for reminding me of the ‘glory days.’