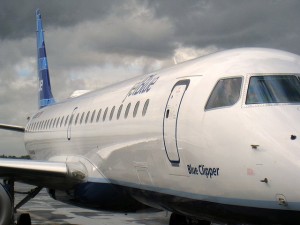 Although millions of dollars are spent on airline security each year in the United States, it only took $100.00 for a JetBlue ticket agent to allow a unknown package to go onto a flight, coming from an unknown person.

On November 19, the Transportation Security Administration (TSA) was at Charlotte Douglas Airport testing out JetBlue’s security. Their goal was to try and get an unaccompanied package onto a flight headed to Boston and unfortunately, they succeeded. An undercover TSA agent told a JetBlue ticket agent that he needed to get a package to Boston that day and would pay the agent $100.00 for helping. The agent took the $100, put it in his pocket and proceeded to follow the unknown person’s instructions. The ticket agent chose a passenger’s name at random, which just happened to be an unaccompanied minor, and the package went through the screening process with no problems. Although the package was harmless, the TSA pulled the package just before being loaded onto the aircraft.

’œThat’s really alarming,’ Anthony Amore, a former high-ranking TSA official at Logan Airport told a local Boston CBS station. ’œWhen you have multiple layers in place you hope that they all stand in the way of a terrorist or someone who wishes us harm. In this instance, many of the layers were cast aside and we were left with this one layer of checked baggage screening.’

When the local station asked the TSA for a comment, they were told, “While we cannot comment on the specifics of an open investigation, TSA can assure travelers that, like checked baggage, every package tendered at the airline counter is screened for explosives.’ JetBlue confirmed that they are ’œfully cooperating with the TSA’s investigation’ and ’œthe involved crew member is no longer employed at JetBlue.’

I do not share this story to cause additional security-related fear, nor do I want to “teach the terrorists” how to commit crimes against passengers. I share it, since I think it shows how spending so much money on the front door of airline security and so little attention on the back is a big mistake. Although JetBlue is partly to blame for training issues, this could have happened with almost any airline. They just happened to have a bad-seed-employee in the wrong place at the wrong time. Currently, the TSA is not talking about how often they conduct these sorts of tests and how often they get a package through.

Sadly, this story is just one of many that place many questions on back-door airport security. At the same exact airport, just a few days earlier, a teenager was able to sneak onto the airport secured area, illegally board a US Airways aircraft without being caught (unfortunately, he died en-route). There is also the story of the pilot who pointed out that airport security workers could by-pass security and caused him a lot of grief. Similar stories keep popping up and I have a feeling more will continue to do so. As passengers continue to give up their freedoms and are willing to put up with many annoyances to fly, while at the same time seeing how porous the security is behind the scenes, people will take note and demand for change.

Well at least this guy did not get suspended like that flight attendant that blew up onboard did. I guess JetBlue must have raised the bar since then. I was starting to think that it was not possible to get fired at that airline!??

Otherwise though, I think that these undercover operations by TSA are paying off. And yes even though so much money is spent every year, it is these kinds of undertakings by the TSA that deter people from engaging in such conduct.

TSA does a poor job of security screening. I think they should clean up their process before testing the airline’s. I watch them do security screening everyday at JFK and the operation is poor. I have witnessed someone go through their metal detector with a screwdriver, go through the pat down process and still the TSA rep did not find it.

So TSA, please clean up your backyard, before you start throwing stones at Airlines that may have a coulple of bad apples. Last I checked, TSA had an orchard growing.

This is a simple case of the TSA and the Airline working within their own boxes. Have the TSA honestly thought of working WITH the airline (I mean the people on the ramp, behind the counter, the flight or cabin crews)instead of AT the airline. If they would begin to realize that their efforts of security is a partnership and consider the airlines operations and respect the people in the airline business, then maybe a good game plan could prevail. The airlines are guilty as well. Instead of striving to hire people with a desire to work in the aviation field and care about the safety of all concerned and the integrity of the system, they choose those who need a logical career upgrade from fast food.

TSA is too concerned with terrorizing passengers, shredding the US Constitution, and exercising their “powers” to actually care about airline security.

Speaking of the US Constitution, thanks to the thugs at TSA, it goes on trial on the 20th in Albuquerque: http://www.kob.com/article/stories/S1875813.shtml