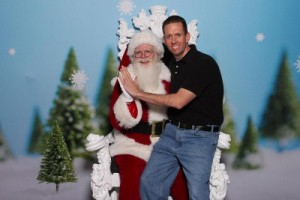 Southwest Fan and FlyerTalk moderator for the Southwest forum Drew gets a photo with Santa at Phoenix.

Traveling during the holidays can be very stressful. Why not put a little cheer into your holiday travel experience with a fun photo with Santa?

Southwest Airlines is teaming with Microsoft to provide free photos with Santa at participating airports (Seattle is included). If you aren’t able to make it out for photos, you can still create your own holiday card online or sign up for their contest to win cool stuff including Southwest Airlines tickets.

There are only four more days to get your photo: December 17-20th before Santa needs to head north to get ready to delivery presents. I wanted to try and make it down to Seattle-Tacoma International Airport to get my own photo, but my schedule wouldn’t allow it. Luckily Drew (aka @curbcrusher) who lives in Phoenix and is a moderator for the Southwest Forum on FlyerTalk.com, was happy to share his photo. High-five is right Drew and Santa! Party on.

This blog post is great and the picture makes me laugh! Drew is so much fun and such a good sport! Thanks for posting David!

Does this Santa also deliver the gifts using Southwest Airlines or is he only there for the photo op? 🙂 Southwest always come out with such original ideas, I really like that.