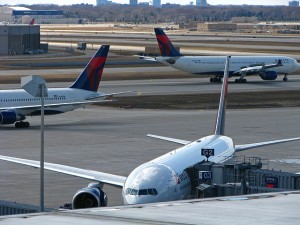 Quick! What are the three different aircraft types in this photo?

Growing up I flew a lot out of Seattle-Tacoma International Airport (SEA). I would head over to the North or South Terminals and watch planes come and go for hours. I would love looking at two different aircraft and find the differences so I could tell them apart. Some, like the Boeing 727 and Boeing 737 were easy. Others like the DC-10 and MD-11 took a little more effort. With magazines and the addition of the internet, learning the differences became easier.

For those who might not have every aircraft type down, but want to know them better, I found a pretty slick guide on how to know your Airbus and Boeing airplanes from each other.

Check it out. What are some other ways you use to tell aircraft apart?

Although its hard to tell, but it appears to only be two types. The one A/C taxing left to right is an A330, the one right to left is a 767, and the one facing us appears to be another A330 (That’s the international gate).

David the aircraft at the gate has the cut edge on the last cockpit windows on each side, trademark of airbus, which distinguishes it from other companies. So im gonna go with Kevin here, its a 330

The easiest way to tell the difference (for me) between a 767 and a 777 is the relative size of the engines. A 777 has huge engines. Look at the 767 in the background, then compare the size of its engines to the parked aircraft’s engines. The parked aircraft has larger engines. It’s a 777.

As for the cut edge on the cockpit windows, when I zoom in and look closely at the photo, I don’t see a cut edge. But thanks for mentioning that; I hadn’t known about the different cockpit windows shapes. I’ll have to remember that detail–I’m sure it will be useful in identifying different aircraft.

The aircraft at the gate is definitely a 777, actually cut edge window (as the pic shows) is a giveaway for Boeing 777.

A great article and reference!

For 737 vs A320 I usually look at the nose gear. 737’s are much shorter. Plus, 737 jets (in next gen versions) are squished on the bottom like the aircraft bottomed out at one time.

For regional jets, ERJ’s have longer noses than CRJ’s. CRJ’s also always have winglets. CRJ-200 is flat, CRJ-700 has its rear sticking up in the air when its on the ground and CRJ-900 looks weirdly too long by comparison. I saw a United ERJ-145 with winglets though so they must be upgrading them as they paint over the Continental logos.

Though not true for EVERY 707, 99% of the variants of the Dash 80 (so most 707s, various military craft, the 720) have the trademark horizontal tail antenna, a feature not found on any other jet airliner as far as I know.

I know people that get the A320 family and the 757s confused because of the narrow “dolphin” look. For me, narrowbodies are easy because the 737 has a more angular look, and the tail rises with that small leading edge whereas the A319/A320/A321s have a more rounded look and the tail doesn’t have that leading piece.

The hardest difference to tell IMO is the B767/B777/A330. I first look at the wing; if it has that trapezoidal winglet that A330s have, then I know it’s an Airbus. Also, A330s have a slight downwards slant when viewing it from the side and a trim, pointy nose. It also has kind of an awkward taper in the back, if you ask me. The 777/767 series have much more of a rounded, elegant look.

It seems silly, but the hardest planes I have trouble telling apart is the B777 and B767. When they are far away it is hard to tell size and they have a similar shape.

never had trouble telling those apart … the 777 is just such a larger aircraft.

I know I have seen a 777 about 5 gates away from a 777 and it was hard to tell size. There is a lot in common between the two aircraft.

what about a rundown of the major US carriers and the planes they fly? We know Southwest is an all B737 fleet (other than their recent acquisition), for instance?
I’ve always wondered how you can tell the difference. Interesting about the A340. I didn’t know it was a 4 engine plane. I see them occasionally overhead out here on the eastside. I knew it didn’t look big enough to be a 747, but I didn’t know what it would be. Who flies those? What sort of range are they?

I know Continental, American (once they pitch the MD80s), AirTran and Southwest use nothing but Boeing aircraft. Delta, United, and US Airways have mixed fleets. The best place to check out what each airline has (and used in the past too) is Wikipedia.

Look at the main gear!

The rear landing gear of B767 also tilts forward, i.e., the two front wheels on the truck are lower than the rear two, and will hit the Tarmac first. I think this is quite unique to a 767.

Easy!
I look at the card in the pocket on the seat in front of me or on my ticket!

Sorry, I didnt enlarge the pic, and I assumed it was SEA. DL doesnt fly 777 into SEA. Guess I should have been more observant….i am pretty astute at aircraft too. Father is retired DL, and I work for AS.

As far as the 777 and the 767, the quickest way to tell is the APU exhaust. The 76 has a traditional “cone” shaped exhaust while the 777 has a “squared” APU exhaust. The landing gear is also a give away, as mentioned earlier. However, when spotting a 767 on landing, notice the MLG tilt forward, with the forward most tires titled down. The 757 and 777 both have their gear hanging traditionally with the aft tire hanging lower.

The 767-400 and 777-200 are really hard to tell apart. When you only have length to determine what aircraft it is, it’s really hard. In the Delta fleet, I can only tell you based on the tail number the difference between an A319 and an A320. My way of telling a DC-9 and an MD-88 apart is looking behind the engines for how black they are. DC-9 has so much soot.

Loos like two Boeings and an Airbus in the distance, but which Airbus??

I think the plane at the gate is a 777 because of the Boeing-style cockpit windows that droop a bit on the sides, and the large engines. The plane at the left is a 767 because the tail merges with the fuselage sharply, without much of a curve, and the engines are smaller than the 777. The plane on the top right is a A330 because the tail merges with the fuselage very gradually, with more curve. And even if I’m totally wrong I had fun reading everyone’s comments and giving it a shot!

just look it up

I just laugh with myself alone,coz i know i am so innocent with this kind of conversation…
I never had knowledge in all types of airplanes,coz i am coming from a very poor family in the Philippines,but since i read all of the comments,i had learn a lot,i feel like a pilot…
So usefull…
jajajaja
Thanks everyone…
Happy New Year,wish u all d good luck…

B767 on the left, A330 on the right, and the one causing all the confusion in the middle at the gate is definitely Boeing (V-shaped bottom window line), and I would say it’s a 767. Its engines are nowhere big enough to be a triple 7.

I agree with Dickie. Cos for one the main landing gear on both planes are jus four wheels on each side, against the six wheels of the 777. The third one is definitely an a330 or so. I love knowing my planes tho.

There’s alot of ways to tell a 777/767 apart first off the landing gears second the engines and third the 777 has that mean look too it plus u can tell by that cone, and the tail fin is much like a killer whale going up

The hardest ones for me to distinguish are the last 3 major Boeing widebodies – the 767, 777, and 787. Sure, there are lots of little details you can use if there’s one on the runway next to you – wingtips, APU, etc. But when you see one flying over your house at many thousand feet, not so much. Any good tips on distinguishing those three from a distance?

How you do you tell a difference between plans such as B747,B777 and other plans that falls under the same cathegories