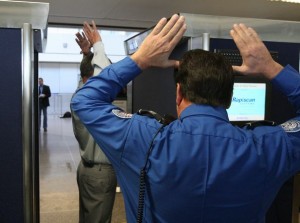 Jim Forman with KING5 was at SEA last week and got a first look at the body scanners. Some of the people he interviewed said, â€œIf it keeps us safer on the flights, it’s worth it.â€ Well, what if it doesn’t keep you safer? Is it worth it then?

Aubrey Cohen with the Seattle PI asked about privacy and health concerns. The TSA explained to him that the machines are not able toÂ  store images, and the screeners in the room may not have any cameras, cell phones or other recording devices. The TSA also applies a “privacy algorithm” that makes the images less explicit. Even though there might be the rule of no cameras or phones, that doesn’t mean all employees across the country will listen to those rules.

https://www.airlinereporter.com
How One Photo Can Show the Difference Between Bloggers and Legacy Media
Travel Time: Off to Tokyo
3 Comments

Really? Wow. I didn’t know that I could choose not to be scanned. Well, I guess I could…but I would just have to go home. Don’t we have to be security screened to be admitted to the concourse? I think I’ll trying saying, “No, I’d prefer not to be scanned” next time I go through and see what happens.

AIT is designed to be an easier way of meeting the detection capability of a strip-search. Which is why it was first used on prison inmates in lieu of a physical strip-search. It doesn’t only show objects. It shows strikingly detailed images of a persons naked body so explicit the images need to be viewed in a separate location and the image viewer is not allowed to see the passenger being screened because it would be considered violation of privacy.

You have the UNCONDITIONAL RIGHT to OPT-OUT and especially to OPT-OUT your kids!
Click on my name above or go to:
http://DontScan.me
for important safety and privacy information as well as actual images, not the propaganda that TSA is spewing.