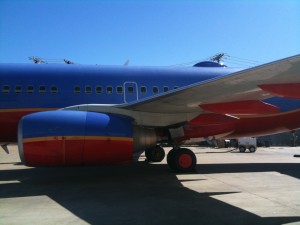 Southwest Boeing 737-700 (N495WN) that is just hanging out on the ground providing Wi-Fi. That bump tells you it has internet.

I am currently sitting on a Southwest Airlines Boeing 737-700 with Wi-Fi (N495WN). I am on the ground and going no where. I have been spending the day with Southwest at their Dallas headquarters with their yearly Media Day. One big announcement given today is that Southwest will only be charging $5 for Wi-Fi. It doesn’t matter what device you are using (laptop vs phone) or how long your flight is, it will only be $5.

Right now there are only 32 aircraft with Row44 internet installed, but Southwest is in full swing getting their other aircraft installed. They hope to have all their Boeing 737-700’s equipped by the end of 2011 and the entire fleet by the middle of 2013.

This special $5 fee is an extended introductory fee. Southwest says the Wi-Fi will be $5 during the entire installation process and they aren’t sure where it will go from there.

Currently, you will have to pay $5 per leg that you fly, but they hope to have it changed where $5 will get you internet for your whole flight with stops. Also, at this time you can’t see online which flights will have internet, but Southwest will send you and email the night before and let you know you can get internet.

Anything about frequent flyer deals? How about a year pass? I fly WN quite a bit and that would be ideal!

Nothing about longer-term contacts yet, but I would expect them to have some sort of deal in the future.

$5 until installation complete. After that, it ain’t gonna be $5 no more, you can bet your farm on that.

Well, it won’t be totally installed until mid-2013 and who the heck knows what will happen them. I still bet some airline might be offering free Wi-Fi by then.

AS started out with Row 44. They were taking FOREVER to get the job done and the one test aircraft we had done with it was not functioning as planned. It was going to take multiple years to get the job done. It was also going to involve Row 44 cutting a big hold in the top of each aircraft to put a dome on top. Which is why we pulled the plug on the Row 44 contract and went with GoGo. GoGo is installed overnight and has zero mechanical issues so far. Nearly our entire fleet has been done within two months. And we still have that hideous Row 44 trial-run 737-700 with that big old dome on the top of it…..which will remain.

GoGo might be a quick, cheap install, but it can’t go over water. I think the future will be satellite internet and that is what Row44 has. For airlines that don’t get out of cell range, GoGo is a good fit, but those that do, GoGo is pointless.

Where GoGo is getting signal up in Alaska and Mexico for Alaska, no hope for flights over to Hawaii. Overall, GoGo for Alaska was a good call. I think with Southwest looking to expand on more international flights, Row44 makes sense.

Wifi should be free. If a hotel can do it, an airline can do it. Considering how high ticket prices are, paying for Wifi is a rip off. Heck, you can walk anywhere on the ground and be able to get free Wifi. In my opinion, it’s time for airlines to get the bucket off their head and open their eyes to the modern world. People have different expectations now. Paying for Wifi isn’t one of them.