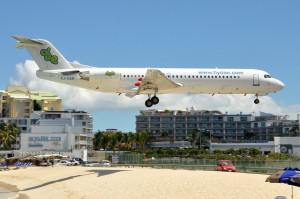 Using this photo is not really fair. Almost any livery is going to look good landing at St. Maarten. When you take a look at her livery on the not-so-exciting ground you can see it really is nothing special.

Dutch Antilles Express (DAE) is a small airline based in Curacao, Netherlands Antilles. The airline only has a fleet of five: three ATR 42s and two Fokker 100s.

Even though the airline started back in 2005, their about us section of their website still has, “under construction,” which is not very re-assuring.

Dear commentator,
To answer your questionmark regarding the fact that we have not published “about us” is due to the fact that DAE has just been taken over by a new owner. New owners hav new plans and strategies, so that takes a fwe week to filter that out and to come to sansable content at that place.
The landing is not spactacular, it’s all about the aircraft. The photogapher obviously loves the Fokker100 of its looks. We are proud to own two of these aircrafts for the time being. Most likely thes will be replaced in 2012 by Airbus or Boeings.
Best regards,
Fred Lanson
Chief Commercial Officer
DEA “connecting the Americas”

Thanks for writing. When a new livery gets on board, definitely let me know and I will do another livery post.