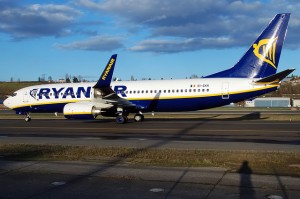 Ryanair’s CEO Michael O’Leary is known for saying crazy things. Standing seats, paid toilets and more recently flying with only one pilot. This bizarre approach gets him and Ryanair a lot of free publicity. It is a genius way to do things, because it works.

Well O’Leary recently said some very interesting things that was reported by The Guardian and he isn’t getting much attention. It is odd because this is some of O’Leary’s craziest stuff ever: he wants Ryanair to improve in quality.

He told the Guardian that he feels Ryanair is maturing and with  growth, they need a new strategy and a new leader. O’Leary feels that the airline needs to talk more about what they can offer versus being the cheapest airline at all costs.

Whoa! What? Does that mean no more crazy rants? Well don’t get too excited, because even though he says he should leave, he also says he won’t leave until the airline doubles in size.

O’Leary stated, “When we are twice the size we are now, at around 400 aircraft, then the growth rate slows down to 2% or 3% per year. The shareholders will want a return. You will need a different management then. We won’t need my dog and pony show, which is about generating publicity. Every company has to move from being the high-growth Robin Hood.”

Well, at least he knows his shenanigans is just a show.

Love Ryanair or hate them, they have a model that works. They can do almost whatever they want because they charge so little? Why change something that works? If they move out of the crazy realm, I am sure other airlines would be more than happy to step up.

There’s no doubt that with age and growth comes a whole other set of rules. Its like moving from grade school to middle school. Or teenager into being an adult. Not always fun. But necessary.

You are very right. But the problem is most of the time, the founder or person in charge is not willing to let go of the power, it is time for them to move on and let someone else take over. Very few people can lead during the creating, strong growth and maturity of a company.

The funny thing is that Mr O’Leary probably didn’t make it as a stand up comedian, so what did they do? They let him run an airline. I would not be surprised if one day that guy had his own TV show called “Ryanair”.

Oh yeah by the way, this is the same guy that challened the CEO of LOT Polish Airlines that if he were to remove the fuel surcharge taxes like Ryanair did that he would walk downtown Warsaw naked back a couple of years ago. Ofcourse it never happened, thank God.