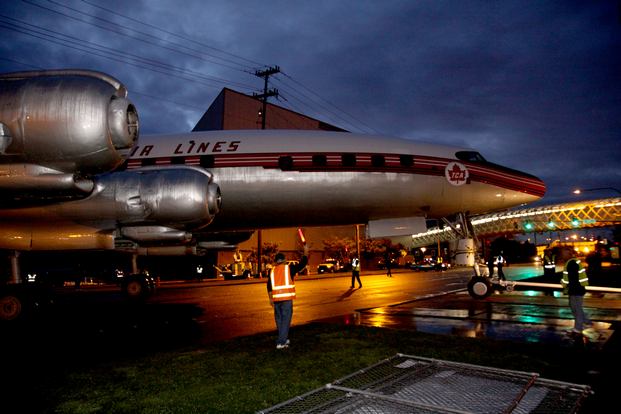 Ah lack of sleep, it bites. Early Saturday morning (we are talking 3am), I was set up to head down to the Boeing Plant Building 2 to check out restored aircraft being stored by the Museum of Flight. Lack of sleep and a full day of activity (flying back from Atlanta), I totally slept through my alarm at 2am…oops.

Luckily, Ted Huetter with the Museum of Flight did not have the same problem and was able to share some photos.

Historic Plant 2 is famous for building so many bombers for World War II. The plant is set to be destroyed to make better use of the land. Inside the plant lived a B-17, B-29 and aLockheed Super Constellation all owned by the Museum of Flight.

Boeing isn’t saying when the building needs to come down, but they gave notice to the Museum of Flight they need to move their planes.

The planes had to cross a busy road and how do you go about doing that? Well, you do it at 3am…that’s how. All three aircraft were moved from old Plant 2 to the museum. The B-29 was moved to a ramp outside of Hangar 7 at Galvin Aviation and will be stored temporarily. The B-17 is being stored in a hangar at Clay Lacy Aviation. Finally the Constellation will be stored at the Airpark.