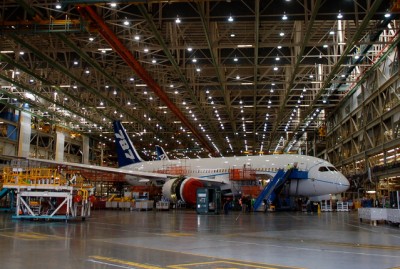 The rumor-mill is a buzz for when the 6th Boeing 787 Dreamliner (ZA006) will take flight. I am hearing early October and the closer we get the more reliable the rumors will be. It has continually been pushed back, but sounds like we are finally getting close.Â  I wasÂ originallyÂ hearing October 2nd or 3rd. Either one would be great, since that is a Saturday and hopefully those of you who are local folks can make a trip to Paine Field and watch a first flight of a Boeing 787. Even if you have seen one take off, it doesn’t hurt seeing another!

* ZA006 is the second Dreamliner to use GEnx-1B engines (ZA005 was the first).
* It will be used to test:Â electromagnetic effects, Â high intensity radio frequency andÂ ETOPS (let’s aircraft fly over long stretches, like an ocean, without an emergency airport).
* ZA006 is the last dedicated test aircraft. Another 787 Â production model will be used, since a small portion of the testing has to be on an airplane in production configuration as opposed to those that have unique flight test equipment installed.