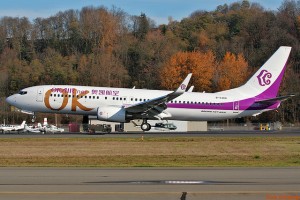 When you aren’t looking for the best or the worst, check out Okay Airways. Ok, maybe not really, it has to do more with the translation than a statement on their quality of service. Okay Airways was founded in 2004 as China’s first private airline.

The airline had to suspend operations at the end of 2008, but started back up again in early 2009. They are growing their fleet of Boeing 737’s with a recent announcement of 10 additional 737-800’s have been ordered and expanding their regional fleet with new Xinzhou-60.

Thanks David B for this livery!

http://www.airlinereporter.com
Happy Friday the 13th! A look back at Row 13
Video: Boeing 707 vs De Havilland Comet 4 – Who Wins?
9 Comments

The livery looks pretty good. Maybe someday those “boring” airlines figure out the power of new liveries and marketing

I like the uniqueness of this livery. Not too many can do the pink/purple thing. Then the big OK on the side. Not the prettiest…but not too bad either. I guess it is kind of “OK” 🙂

LOL! That is awesome.

Yes, I’m having a one man slogan competition with myself on your blog. Sorry.

OK, we’ll take you there

its just OK. Don’t expect much.

Though one must be careful, the IATA deisgnated OK is assigned to Czech Airways. Okay is assigned the useless BK.