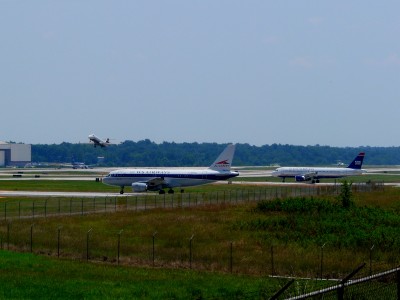 One of my readers, Drew, sent this awesome photo to me that he took at Charlotte Douglas International Airport and I wanted to share. This photo shows an Airbus A319 in old Allegheny livery next to an Airbus A321 in new US Airways livery. If you take a look in the background you can also see an A320 in previous US Airways colors and a CRJ taking off.

Allegheny Airlines changed its name to USAir in 1979 after airline deregulation. Then in 1997 USAir’s name was changed to US Airways.

https://www.airlinereporter.com
Can Jet Blast Be Harnessed For “Free” Energy at Airports?
Are Airliners Going to the Boneyard Sooner?
2 Comments

I had the pleasure of flying on the “Allegheny 319” from PVD to CLT the day after this article was published.

It is so weird that the livery on your plane doesn’t really matter, but it so much does when I fly. I like having a cool looking livery to show off to other people seeing me on the plane, even though I know no one is seeing me!

The Allegheny one is definitely a nice classic and I have a soft spot for those classic liveries!