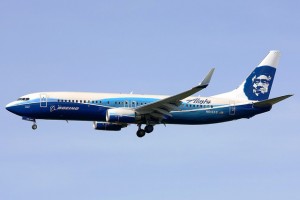 The group hopes to examine all phases of developing an aviation biofuel industry and the funding is being split between the involved parties. SAFN will be looking at local biomass sources that can be found in the Pacific Northwest.

“By transitioning to a more fuel-efficient fleet and adopting technology to follow more direct flight paths, Alaska Airlines has made significant strides in minimizing the environmental impact of our flying in the communities we serve,” said Alaska Air Group Chairman and CEO Bill Ayer. “Through this initiative, we are joining other key stakeholders in our region to explore the development of alternatives to jet fuel that could further reduce our carbon footprint.”

The project is starting this month and is expected to take about six months. Air travel currently generates approximately 2 percent of man-made carbon emissions, and the industry has set aggressive goals to lower its carbon footprint, which includes the use of aviation biofuel when it becomes available.

This is only one of several regional biofuel projects that Boeing is currently working with. Curious to find out what Boeing hopes to achieve in this project, I spoke with Terrance Scott,Â  who is with Boeing Environmental Communications. He explained there are four ways to help airlines curb their carbon emissions. The first is product development, where Boeing creates new, more fuel efficient aircraft, like the Boeing 787 and the Boeing 747-8. The second is to retrofit currently flying aircraft with performance packages, winglets and other items. Third is to change the way airlines fly and operate aircraft in order to be more efficient. The last way is the type of fuel used to power the aircraft.

Boeing has helped or will be helping to set up similar regional groups in the Middle East, China, Australia and Mexico. The hope is to create a regional portfolio of fuel sources to create aviation biofuel. Scott told me that Boeing wants to motivate people to find answers, but is not looking to get into the biofuels business themselves. “Boeing doesn’t want to get into the fuel business, but we want to serve as a catalyst.” Their plan is to bring people together, to start talking and working on creating sources for biofuel.

The use of biofuels have already been successfully tested. Boeing has worked with Air New Zealand and Continental to show airlines can successfully use biofuels. Now that biofuel has been proven to be a good alternative to legacy jet fuel, the shift is being made to find a sustainable, economically feasible fuel source. They want to make sure that a fuel source won’t compete with any food source (ie corn and E85).

Most likely any biofuel will cost more than jetfuel today. Would passengers be willing to pay a little bit more to fly green? I think there are some that would, but I am not sure if there would be enough.

You know, I’m finding this whole “save the world” scenario quite interesting, but I really don’t think customers are willing to pay more just so an airline can use biofuels. I can understand some that some CEO would be willing to pay that much, but definitely not the everyday citizen. People want jet prices to drop, not increase. So if a company is trying to make their airline more green, they’re going to have to look at alternatives that will be cheaper for the customer.

Personally, I haven’t been able to fly as much as I’d like, simply because prices are sky high. Instead, I’ve been taking Greyhound busses – much cheaper. It’s too bad, considering that I love to fly.

The possibility of the future of aviation being green is there, but as I said, it’s going to have to be a cheaper alternative. Otherwise, passengers will look for other modes of transportation.

Even if green fuel does cost more, it could provide some consistency. Oil jumps way up and down in prices and it is hard for prices to ever stay consistent. Also, having home-grown fuel allows us not to be relient on current world political issues. So even if you don’t care about saving the environment, there are some pretty cool other pluses with going green!

I agree David,
I am all for saving the environment. The point I was trying to make, however, is that I don’t think people would naturally choose biofuels over saving a few bucks. With that said though, I think airlines should be looking towards solar energy — unfortunately this technology isn’t powerful enough yet to support a 737. Again, especially in this economic time, I just don’t think people are willing to budget a few extra dollars into their fare. On the other hand, if they made this more affordable, I have no doubt that people would go for it.