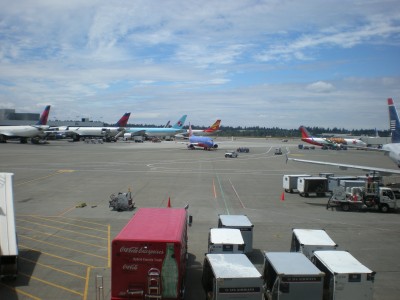 I am currently at Seattle-Tacoma International Airport for another adventure (I love their free Wi-Fi). Last weekend I was able to fly on a personal trip, but today’s trip is for the blog. Virgin America has recently announced new flights from San Francisco to Toronto, Canada.

The airline is having a special shin-dig early tomorrow morning and I am flying to San Francisco today, then on to Toronto early tomorrow morning. The flight to Toronto will have other invited guests, media peeps, CEO of Virgin America, David Cush, and the man himself Sir Richard Branson. That’s right. I will be locked in an airplane with daredevil, highly successful Sir Richard Branson…how cool is that?

https://www.airlinereporter.com
VIDEO: Think Spirit Air’s New Ads Are Bad? Then (don’t) Check This One Out
Will Nintendo Wii be Used in the Cockpit of the Future?
2 Comments

Toronto is a great place. Enjoy your time there. I’ve been thee twice in the last couple months for hockey tournaments. The airport is BUSY. Great for spotting heavies too.

Toronto…..Just watch out for the rampaging anarchists!?! Or did they go back to Quebec already?? What are they protesting? Anything they can. Cheers