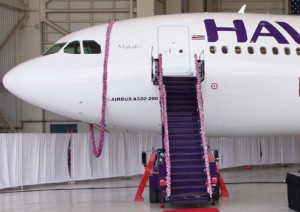 And who was closest? David Brown. Seriously. But it isn’t me, it is another David Brown (there are a lot of us out there and he has an aviation blog too).  Mr. Brown guessed 9855 flowers, which was closest to 9500. I will be mailing him his prizes. Thank you all for participating!

On June 4th the A330 had its maiden flight from Honolulu to Los Angeles. This is the first of 27 new A330s and A350s that Hawaiian plans to introduce into its fleet over the coming decade. Check out this photo of the A330 being pushed back from its gate at Honolulu.