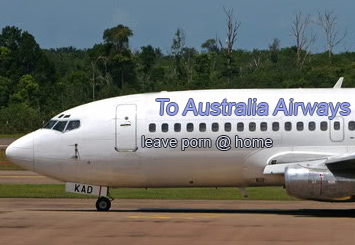 Child porn is bad, don’t get me wrong, but so is invasion of privacy. There are some that are quite upset about this new policy. The Australian Sex Party asks “If you and your partner have filmed or photographed yourselves making love in an exotic destination or even taking a bath, you will have to answer ‘Yes’ to the question or you will be breaking the law,” president Fiona Patten of the party said. She also questions if this means if any device that can hold a photo (camera, laptop, phone, key chain and so many others) can be scrutinized by customs.

With seeing how officials have respected privacy already, I don’t buy it. “Don’t worry sir, we are just reviewing your private home videos and returning them right back. No one has made any copies and I won’t be showing them to my buddies after work.” This is a disgusting violation of personal privacy and doesn’t affect airline safety.

Before for those of you that believe, “If you don’t agree, don’t fly,” start to chime in, let me preemptively counter your argument. If I choose to have legal porn (it is for a friend, I swear) or even private shots of my self naked (which I don’t), that is my right. Me carrying those has no affect on airline and travel safety. If authorities would have probable cause that I am transporting illegal material, then yea, search away. But me stating I am carrying a very legal item should not give them the right to view the item. It would be like “are you carrying any drugs” and having to have all your legal prescription and over the counter drugs looked at if you answered yes because you have aspirin.

Found a PDF stating the penalties surrounding this. This doesn’t talk about customs agents viewing the objectionable material however. Figured I would post the link in case someone wanted to read it: http://www.customs.gov.au/webdata/resources/files/ACN2009_55.pdf

From the document, objectionable material “can be contained in publications, films, computer games or computer generated images. It may also include the more serious offences of child pornography and child abuse material that are already subject to Tier 2 penalties.”

Thanks for finding this. It is only one-page and I am sure doesn’t reflect all the policies they have to follow. I do plan to follow up on this and find out more information and I REALLY want to get a photo of the updated card.