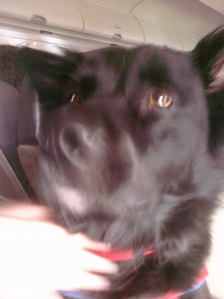 It’s 5:30am and my alarm goes off. Less than 2 minutes later I get a phone call. The shuttle is calling to let me know that they’re early (and acting like I should give them a prize for being early before 6am!! Not cool. I hug my aunt goodbye and hop in the shuttle. We go to pick up other passengers and at one stop, I can see that the driver missed his turn on purpose because a police officer had just made the same turn in front of us and apparently I’m dealing with some kind of felon as a driver because he doesn’t want to be anywhere near an officer ’“ greeeeaaaat.

Finally, we arrive safely at LAX. I’m already checked in and sail through the TSA line. This officer actually flirts with me and this is the only time I have ever gone through airport security and remained in a good mood.

And then we begin the boarding process’¦

As I’m walking down the ramp I notice this woman in an argument with the gate agent. The woman has about 6 carryon bags (including a guitar in a hard case and a black dog on a leash wearing a service animal jacket). The woman is upset because the agent is telling her they may not be able to get her guitar into the first class closet and it may need to be checked. I was thinking to myself that both women should calm down ’“ the one with all the carryon should have been at the gate earlier and the agent should really just learn to be NICE!

I sit down and stow all my luggage (a modest duffel and my backpack/bookbag) and then I notice that the woman with the carryon & the dog are definitely going to sit with me. She’s bumping into literally everyone as she goes down the aisle with her carryon, dog, and not small self (only 9 rows back) and now I’m a little annoyed. She is calling a lot of attention to herself and her dog is clearly a poorly-trained ’œemotional support animal’ and I’m starting to feel a little of the gate agent’s pain on this one. Finally she sits down and the dog squeezes into the floor space between us.

Moments later a man walks to the edge of our aisle and is visibly annoyed because he sees my seatmate literally spilling into his seat and then he notices the dog where his feet are supposed to be. The woman is not exactly accommodating to him or the flight attendants and made a comment about how it was the flight attendant’s job to fix the situation and she was not particularly interested in taking up her ’œfair’ share of the seat. The gentleman moved on quite quickly and the flight attendant apparently did reseat him.

The woman settles in, and before the door is closed she hits me with, ’œI’m sorry I’m such a pain but I’m heading to my father’s funeral.’ Who’s the asshole now, D’½

So, we talked, she cried, I did some good while on the plane’¦ Taught me a lot about how to take a minute and have empathy wherever I am. It was a great lesson especially since I had just spent 4 amazing days at a conference renewing my passion for counseling ’“ how fitting that a woman in need of some brief grief counseling would end up sitting next to me on the plane (with her sweet doggie)!

I don’t care what your excuse is, there is no reason to be rude to any of the agents, the FA, or a fellow traveler. Plus, you still have to follow the rules. Carryon baggage rules are located at 14 CFR 121.589a

I am sorry that her father passed away but that does not excuse her behavior or the trumped up excuse of having a comfort animal (I like dogs but bet that she cannot show documentation that the animal was actually trained as a comfort animal, as opposed to an excuse not to check the dog as is required for all other large animals). The person that you sat next to is having a train wreck of a life and you happened upon her at the moment that she gets to wallow in her self-pity glory moment (who doesn’t feel sorry for a person who has had a close relative pass away). I suspect that she treats all people in her life like she treated the airport and airline staff (which I know a few – the stories they tell me about dealing with the public day in and day out) regardless of the circumstances. The person you described is likely to be extremely emotionally manipulative in all situations in order to get what she wants, you being a caring person was probably caught in her net.

Ask any trained medical professional that you know and I suspect that they will help you understand she was likely suffered from a Cluster B (dramatic, emotional or erratic disorders) personality disorder.