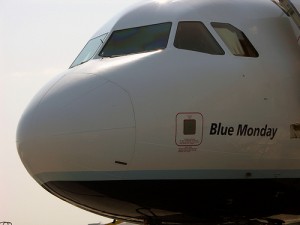 The nose of a Jetblue Airbus A320

Ah, a fight with the significant other. Coming up with a good argument to prove your point is always key. Threatening to crash a plane you will be flying with people aboard is NOT ok.

A JetBlue pilot flying out of Logan Airport in Boston was questioned by the FBI after he sent an email to his girlfriend threatening to crash his plane, if she would not reconcile their relationship.Â A search of his phone showed that he did send the email and he is currently at a Boston area hospital for psychiatric evaluation.

Bryan Baldwin, manager of corporate communications for JetBlue, wrote in an email to WBZ-TV, “At no point were any customers or aircraft in danger. We are working closely with Boston authorities to ensure our crew member receives appropriate medical attention.”

Most likely just an empty threat, but one that is being taken very seriously.

I’m really inspired along with your writing talents and also with the format in your blog. Is this a paid topic or did you modify it yourself? Anyway stay up the nice quality writing, it is rare to peer a great weblog like this one today..

Thank you a bunch for sharing this with all of us you really recognise what you’re talking about! Bookmarked. Kindly additionally consult with my website =). We will have a link change arrangement among us

Hello there, You have done a fantastic job. I’ll certainly digg it and in my view suggest to my friends. I’m confident they will be benefited from this website.