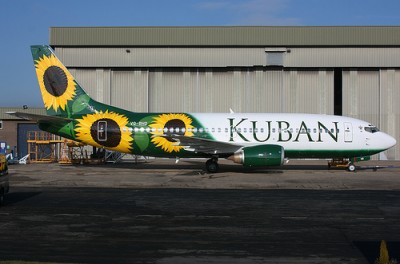 Kuban Airlines was founded back in 1932 as a division of Aeroflot, in Krasnodar, Russia. In 1992 it was mostly privatized with the state owning 51% and the employees owning 49%.

This February Kuban Airlines added three Boeing 737-300’s to its fleet with a brand new livery. The airline also flies 12 flew Yakovlev Yak-42D’s in their old livery. They fly to about 18 domestic destinations, but will also fly chartered international flights.

If you know Russian, you can learn more about them on their website.

Thanks Yvette for this find!

I love this livery!!!