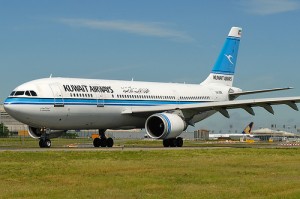 Official paperwork shows the three extras were “offloaded” on paper and their boarding passes were not scanned so their presence was not recorded. ’œAfter the three passengers were handed their business class boarding passes, the airline staff was instructed not to scan their passes so that their presence in the flight was not registered in the airline’s records,” an official said. The three were cleared through Customs and allowed to board the Kuwait Airways Airbus A300. Since the three were offloaded on paper, the trim sheet for weight and fuel distribution was updated accordingly. A pilot’s calculations for takeoff speeds and flap settings are based on the trim sheet.

This incident is a serious violation of safety procedures. Even though the passengers had to clear Customs, having three people with no paper trail is a huge security issue. With the right connections people involved in human trafficking, kidnapping, and terrorism could get people to a destination with no record.

https://www.airlinereporter.com
VIDEO: 20 Ways to Use a Maxi-Pad Onboard an Airline
Video & Pictures of Boeing 747-8 Gauntlet Testing
5 Comments

I HATE KUWAIT AIRWAYS BIG TIME. Believe it or not there was a big fight between passengers and duty officers KA(Can u imagine). In spite of over booked flight and cancellation of KA tickets the staffs are getting on our nerves to surprise us more for the long waiting hrs already spent. Compensation paid was very less for 24hrs waiting and other passengers got shifted to B-CLASS due to recommendation and there was some harsh talks and physical arguments. I saw Indians recording the whole show on their mob-cams to take the issue up.. FINAL verdict KAC SUCKSSSSSSSSS BIG TIME….

Thanks a lot for sharing this with all people you actually understand what you’re talking approximately! Bookmarked. Please additionally talk over with my web site =). We will have a hyperlink change agreement among us!

I’m not sure exactly why but this web site is loading extremely slow for
me. Is anyone else having this problem or is it a issue on my end?
I’ll check back later on and see if the problem
still exists.