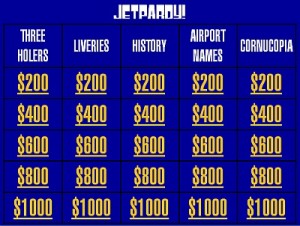 Check out the great catagories on Jetpardy

If the idea of listening to a lot of smart airline people compete in a Jeopardy-like format sounds AWESOME to you, you might be an airline nerd. Today at 5pm PST, the first episode of Jetpardy will be playing, you don’t want to miss it. These will be the contestants:

Brett Snyder ’“  The Cranky Flier and the Cranky Concierge,@crankyflier on Twitter.

For more information, check out the Airplane Geeks website and to watch the action, head over to Ustream at about 5pm today!