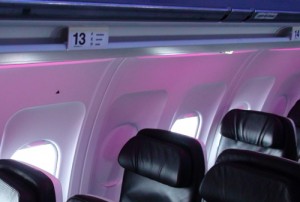 https://www.airlinereporter.com
Aviation in Seattle: Exploring the Future of Flight
Greetings from 36,239 Feet!
33 Comments

As an international pilot it’s kind of funny to me that I never really paid attention to the missing rows though I have always noticed that many hotels do not have a floor 13. I am sure this fact does not get by someone who has a fear of the number 13. People who have a phobia are intently focused on that fear. For example, someone who is afraid of spiders will notice them everywhere. My focus is to help people overcome fear of flying and now I realize maybe I have a new niche! I will be posting a link to this on my blog because I know my readers will enjoy it.

What is your number one advice for people who have fear of flying?

Many smaller aircraft in Australia have Row 13 as the exit, so you could say it is lucky! 🙂

Hasn’t anyone noticed that row 13 can’t crash without the same happening of all the non-13 rows?

Totally agree. Person in row 13 will have about the same luck as everyone else on the plane!

THis is funny indeed.
Row 13 may be absent but, the 13th row is ever present! SUperstition is an error but superstitious men persist in devilishly. Probably they ignore that errare humanum est, perseverare autem diabolicum.
But….believe me: if they assign to me a seat n. 13 or 17, a row 13 or 17, I don’t go away.
Ciao 🙂
Giorgio from Italy

I think this whole 13 thing is very childish of the companies.

It’s good if all the airliners maintain to have the same seats ordaring number from 1 to the last (offcourse it depends on the type of the aircraft).
As some said, the unlucky on the row 13th will be also for the all who is onbord that time, so I feel there is a favourite seat for everyone but no unlucky seat.
In fact, the row 13 is availabe on each aircraft only without number!!!

Hey I travel a lot and I have never noticed the absence of row 13 or 17 on some airlines. What is the historical significance of this phobia?

13th is on every pln only missin is the no..so the folks just fools themself…

why dont find 13 in the plane

As a regular passenger I think it’s very cool for companies to have little quirks. It makes them unique and provides good conversation. Check out the quirks of Kulula an airliner in South Africa the way they paint slogans on their planes and the way the piolets always make jokes and keeps the passengers amused during the flight – apparently it’s a requirement – very cool and quirky.

Sounds funny ,,, it doesn’t make any sense …as said ,,,its always not must the seat # 13 should be actually 13th row.. numbering change from First class to economy class.

I notice it while travelling with AirAsia,,, few times i ignore it, thinking i might not notice, but one time i check it and just got a thought ,,, WHY NOT 13th…??

A few Western people still believe in supernatural creatures living somewhere up in the sky and others under the ground.

Dear author. Thanks for this article. I am in South Africa and I was flying British Airways today. I was in row 14. I looked for row 13 and couldn’t find it. I quickly googled this mind boggler as soon as I got home and this article answered me. Rgds

Thought it would be something more interesting.
Now I have to read 12other blogs (13blogs)
to seriously beleive this.

Superstition is very pointless. I don’t understand why people allow it to control them.

Nor do I… but if a passenger is going to make a stink about sitting in an “unlucky” row, which delays the boarding process, I am cool with cutting the 13th row!

Avoiding Number 13 is a very old Christian superstition. In China, number 4 is avoided because the Mandarin word for 4 (“si” pronounced “ssuh”)) differs only in tone from the word for death. Chinese hotels may not have a 4th floor. Maybe also not a 13th floor if Western influenced, and also may not have a 14th, 24 etc. Very odd to Westerners! I hadn’t heard of 17 being considered unlucky until now.

@Andrew Jones: 12 disciples the 13th is JESUS, and HE said I am not here to bring peace but ….. so Christian love the 13th, but who are away from HIM should fear. This is the old Christian Supernatural Gift from GOD 🙂

I think it’s really nice to have these funny conversations when there is nothing wrong with missing out a row but there will always be some people who have to be against everything and they will think it’s silly and childish to do things like this but I will tell them to just chill out take a coffee and enjoy a nice conversation.