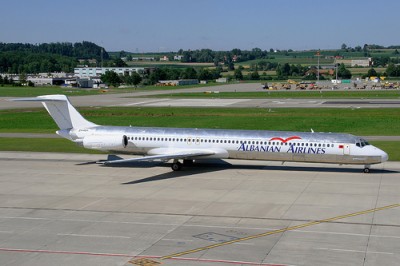 Every week I try to show a different airline livery. I have always been facinated with airline liveries. This week I came across what I think is the ugliest one I have seen so far. It just doesn’t make any sense.  You have this silver body, with white tale, and a big white stripe running down the middle?

What makes this better? They have rotating images on their website and on shows a Boeing 747-400 with a different (and better) Albanian Airlines livery, but it is obviously photo shopped. (although maybe they will get one soon? Their website says, “we are in the process of adding our fleet by B747, 757, 767.”)

They only have four aircraft, one MD-82 (pictured) and three BAe 146’s. The BAe’s have a different livery (the best of the three in my opinion) than the MD-82 or the photo shopped Boeing 747, which makes me think the MD-82 is sporting a livery of the previous airline they bought the jet from and they slapped their logo on it.

I can understand saving a few bucks, but it doesn’t help them create a recognizable brand and would make me think twice about flying. However, they were using just TU-134s only eight years ago and I much rather fly on an ugly livery’d MD-82 than a pretty and matching TU-134.

https://www.airlinereporter.com
Ryanair Might Stop Growth Due to No Planes
VIDEO: Take TWA’s L1011 to the East (and get a steak meal)
7 Comments

This MD82 is very ugly to be honest:)

But Albanian Airlines has now a new investor. I was in Tirana in October and saw a B747 and B757 unpainted which will belong to Albanian Airlines, now they have leased a B737 and 757 from Air Slovakia and some other Fokker 100 will increase the fleet (The investor bought 15 Fokker 100 from KLM)

…but it will be very difficult for Albanian Airlines because they have a very good competitor, Belle Air with which I fly every time to Prishtina, my home town:)

That is very exciting, if Albanian Airlines is able to grow so much. I will keep an eye out and do a new livery post on them if they put some good logos on the new planes 🙂

Its true that Albanian Airlines will get these new planes because I also saw a Boeing 747 without liveries in Tirana. This is going to be exiting. I hope they start direct flights from the US to Albania.

Note that the all white plane at TIA/LATI is a 757 and not a 747. The aircraft is F-GTIP (seen in October as well as December).
Albanian now does have 2 733s and another 757 (these three in the new color scheme) as well as 2 BAe 146s (both in the new c/s). The MD-80 (pictured above) ZA-ASA is gone and clearly had a hybrid (or non-complete) livery based on the one first displayed on SU-RAB

and here’s F-GTIP at TIA

I am excited to see it in Albanian Airline’s livery!

If you get a pic of the new livery on the B757 I would love to use it on an updated post with credit to you!

F-GTIP is still white (as of Dec 28th). Albanian does have another 757 on wet lease from Air Slovakia OM-ASG as shown on Skyliner Aviation. Unfortunately it wasn’t in a position I could take a photo last time I was there.