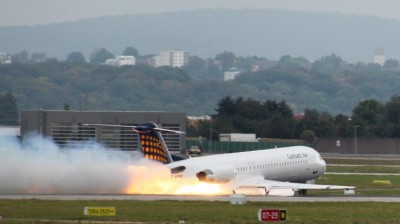 This Monday ContactAir flight C3-288/LH-288 from Berlin to Stuttgart Germany had a faulty gear warning during approach. They delayed landing and spent 90 minutes trying to troubleshoot the issue with no luck. They decided to land without the gear and created quite the show.

The aircraft landed on its belly and all passengers and crew were safely evacuated. One passenger and one crew member were treated for minor injuries.

This is scary. I’m glad that the plane landed without any major injuries and deaths!