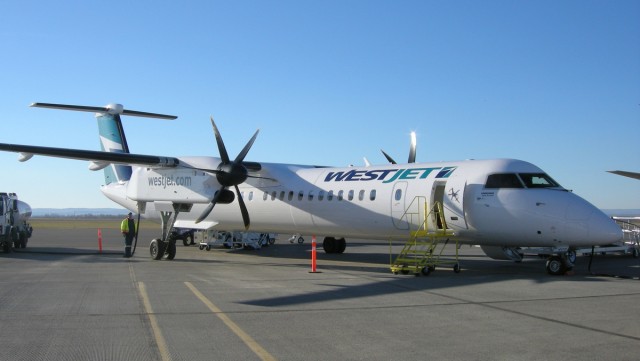 Translation? I’m flying with WestJet Encore on a Bombardier Q400 from Vancouver (YVR) over the Canadian Coast Range and Rocky Mountains, and visiting Westjet’s base in Calgary (YYC). I’ll leave it to you to find out about Timmy’s.

WestJet Encore began flying in late June with two 78-seat Bombardier Q400 NextGen turboprops. Since then, five of their initial order of 20 Q400s have been delivered, and they have options on another 25 planes. WestJet Encore augments WestJet’s Boeing 737-based route structure with regional flights of distances up to 700 miles. That’s about a two hour flight time for the Q400, but most destinations are 60 to 90 minutes apart. Having the Q400 in the fleet will give WestJet the flexibility to fly to new destinations, add additional frequencies to current destinations, or “right size” the service throughout their network by swapping 737s with Q400s. The Q400s are pretty quick, with flight times within 10-20 minutes of a 737 over these short distances.

The first destinations included Nanaimo, BC in the west, and as far east as Saskatoon, SK. As more planes come into the fleet, Encore is adding  destinations and continuing their expansion eastwards. Encore brought WestJet service back to Brandon, MB in September, a destination that previously couldn’t support WS 737 service. This YYC-YBR flight is currently Encore’s longest, at a bit under 2 hours. In addition to adding direct regional flights to the WestJet schedule, Encore will look to keep travellers “in the family” by providing connections to mainline WS flights, and those operated by codeshare partners. Encore is also part of the “WestJet Rewards” frequent-flier program, and shares facilities with WS at common destinations.