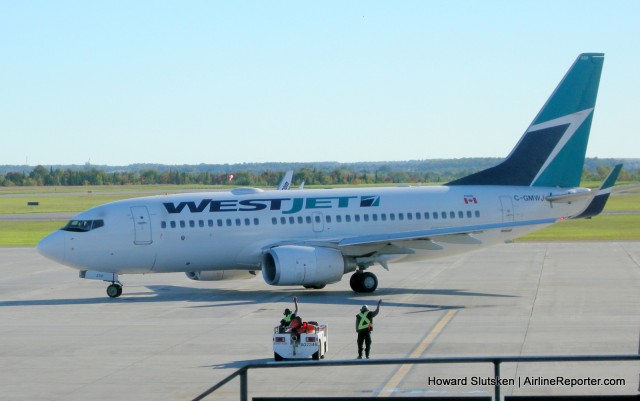 What viewers of The WestJet Channel might be watching – the ramp crew waves goodbye to a
departing WJ 737-700 at Ottawa Macdonald-Cartier International Airport. (YOW)

The WestJet Channel is now available to approximately 2.2 million subscribers on Rogers Cable Channel 206. The 24/7 content includes video of WestJet’s vacation destinations, includingÂ Grand Cayman, Bermuda, Puerto Plata, Holguin, and St. Martin-St. Maarten. I wonder – will they have shots from Maho Beach of their 737s landing at SXM?

Tied in to the channel’s 13-week run, viewers will be able to enter three Twitter contests (#TweetTheBeach) for a chance to win a trip for two with WestJet.Â For Canadian AvGeeks, The WestJet Channel also includes coverage of the airline’s ramp operations.

There wasn’t a note in WJs press release to suggest that the ramp ops would be live, but we can hope. Watching ops at YYZ or YYC on a wintery January afternoon might be a perfect way to zone out in front of the TV for a couple of hours.