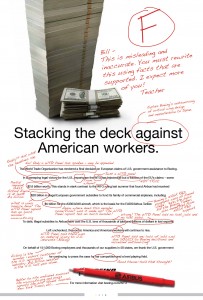 Although Twitter for the two has seemed to calm down, both airline manufactures are still participating in public conflict . EADS North America Chairman Ralph Crosby Jr. recently stated he feels that Boeing cares more about winning the tanker than American troops getting the best product. ’œOur campaign has been based on enabling the understanding of the superior capabilities and value of our system under the rules that are established. And what I see in terms of advertisement and sort of third-party and paid surrogate statements is that, well, whatever (Boeing executives) do, they may or may not win, but they sure want to keep us from winning and, frankly, from my perspective, if that’s anybody’s approach then I think it’s irresponsible to the warfighters.’

Boeing tanker spokesman Bill Barksdale responded by saying, ’œRather than take shots at our European competitor, the Boeing Company continues to focus on being ready to build tankers if we’re honored with a selection and contract award. The selfless men and women of America’s Air Force deserve no less.’