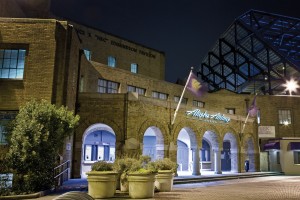 The new look: Alaska Airlines Arena at the University of Washington. Click for larger.

I know, this might not mean much to most of you, but this is my hometown airline getting a building with their name on it at my alma mater, so I wanted to share. The on-campus basketball arena will now be called “Alaska Airlines Arena at Hec Edmundson Pavilion” at the University of Washington Seattle campus (UW now has three campuses: Seattle, Tacoma and Bothell but they are all the Huskies). This is a five year agreement between the airline and the university. Alaska will be paying $525,000.00 per year on top of the $175,000.00 already paid in athletics’ sponsorship.

“We are thrilled to expand our long-standing relationship with the University of Washington and that the Alaska Airlines name will be associated with the proud history of Hec Edmundson Pavilion,” said Alaska Airlines President Brad Tilden. “Husky basketball is a time-honored tradition enjoyed by many in our community, including our customers and our employees.”

Alaska has been doing a great job partnering with a lot of northwest organizations and companies to really show they are Seattle’s hometown airline  and this just furthers that.

Image of Alaska Airlines image on the court 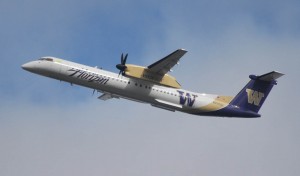 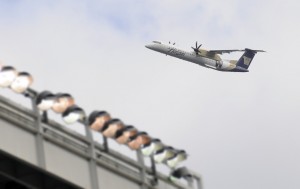 This is one of five current variants of collegiate liveries. The others include:  Oregon, Oregon State, Washington State and, on Nov. 8, 2009, Boise State will join the fleet. I was a little upset to see that University of Washington had a prop and our rival Washington State University had a jet. However, Clint who works for Horizon Marketing told me, “We’re in the process of phasing out the jets and they will all be props once that is done. BSU will also be a prop,” which makes me feel a bit better! I think it looks better on the Q400 anyhow.