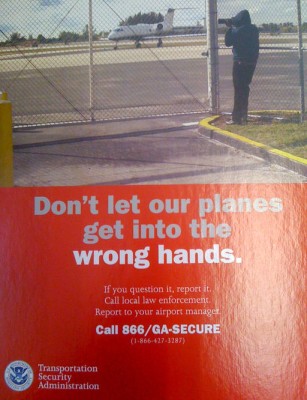 When I saw this poster yesterday via Carlos Miller on Photography is Not a Crime, I thought it might have been fake.Â Making photographers look like bad people is a bad idea. It will cause more people to be fearful and waste the time of law enforcement officials. Yes, if you see someone by an airport doing something suspicious, report it. Taking photos of aircraft is notÂ suspicious.

Every time I fly I am constantly taking photos. I used to use an HD camcorder, but decided to stop and use a standard digital camera. There have been multiple times I have received odd looks for taking photos using the camcorder and I even hadÂ a run-in with the TSA.

If you are a photographer and “get caught,” it might be a good time to inform them of your hobby. Drewski2112 shared on Airliners.net about his run-ins with the law plane spotting in Seattle. He once had five cars pull up on him at the same time. Instead of getting angry, he calmly explained what he was doing, shared his passion and by the time they left, some were asking for his website address to take a look at his photos. I only hope I could keep that calm and collective if I had five cop cars on me due to being a perceivedÂ security risk.

Unfortunatly this poster is not a fake, but it is very real. Knowing that many people were upset about the poster, the TSA confirmed on their blog yesterday. They tried to play it off that photographers are important for seeing suspicious activity, but I am not buying it. “In fact, many photographers would be prime candidates to use such vigilance programs to report suspicious activity since theyâ€™re extremely observant of their surroundings.” I am guessing this is more of an afterthought.

Normally I only do one video in a weekend, but I found this video via Dan Webb and couldn’t help but share! 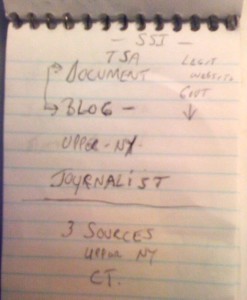 One of the many pages of the TSA agent's notepad. Pic from RunwayGirl

Remember back when the TSA harassed another aviation blogger about a leaked TSA directive? I didn’t think the story could have gotten any crazier, but I was wrong.

Mary Kirby (RunwayGirl) was given photos, from a very reliable source, of a notebook that was dropped by the TSA agent who paid a visit to Steven Frischling (FlyingwithFish) a few days ago.

The source and KirbyÂ are keeping quiet on all the information in the notebook (since they don’t want a visit from the TSA), butÂ Kirby assures me this is not something the TSA would want in the public realm. Asked if she has prepared for her own visit from the TSA Kirby responded, “as any other Irish-American would do, I cleaned my house and made sure I had plenty of teabags at the ready. Iâ€™m happy to report that the TSA has not paid me a visit. I guess that means more tea for me.” Hopefully it stays that way.

I have been in contact with Kirby over the past two and a halfÂ days since she first posted about the mishap.Â She has been emailing and calling the TSA, but no one will respond. “I have made several requests for comment to the TSA, both via telephone and email. I have not received a response,” Kirby frustratedly told me.

Why did the TSA care so much about who leaked one of their very public directives, but doesn’t seem to give a darn about a notebook that the TSA agent dropped? Are they hoping this will go away? Kirby thinks so, “it is my best guess that the TSA has decided to say nothing in hopes that this blog story simply goes away.” So far it doesn’t seem it will. Quite a few media sources have already picked up on this and people want answers.

A good aviation friend mentioned to me that the TSA is coming across like a mixture of the three stooges and the mafia. Trying to be strong armed, trying to do the right thing, but doing both poorly. I really pride my blog with trying to stay positive with all aspects of aviation, but the TSA is making it VERY hard recently.

I asked Kirby who should people contact to voice their concern. Since she has had little luck getting a hold of someone her best advice was to write to the TSA Blog through their Twitter account. Hopefully we will all hear from the TSA soon, but since they haven’t even updated their own blog since December 26th, it seems communicating to the public is not a top priority for them.

UPDATE 9:30am: The TSA has emailed Kirby about the notebook. “In addition, a TSA investigator accidentally dropped a notebook, his personal property, in a public area. The notebook did not contain any sensitive security information; however, TSA will continue to review the incident.” Kirby has posted another image of the notebook since the TSA doesn’t feel it is a security breach.

More information:
* More TSA notebook photos via RunwayGirl
* TSA investigator has butterfingers via Gadling
* TSA Special Agent who threatened blogger spaces out, drops notebook in public place via BoingBoing
* Open letter from Frishling to the TSA about the notebook via FlyingwithFish 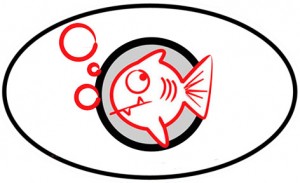 Frischling is looking for some support. You can order one of these stickers by clicking on the photo or link in this blog

I got pretty obsessed with watching how the TSA subpoena story played out, I felt it was an important story and I am glad it got covered.Â I am working on a blog with a few people to talk about the power of Twitter with this story, but for now I just want to keep you updated.

The great news is the TSA backed down and withdrew the subpoena demanding Chris Elliott and Steven Frischling (FlyingWithFish) turn over any documents related to the TSA Directive 1544-09-06. What a great way to start a New Year!

If you were interested in this story too or have found that FlyingWithFish to have a pretty sweet blog, you can help! While the TSA had his laptop, theÂ hard driveÂ got errors. He is working to have them pay for the damages, but will need to pay someone to recover his files. Go to his website to order a cool FlyingWithFish sticker or just to donate some money. Chris Elliott also seeked counceal and needs needs our help. You can help Elliott via his website.

* Support Frischling (FlyingWithFish) by purchasing a Fish sticker!
* Elliott thanks all his supporters and still has kind words for the TSA agent that came to his house
* Frischling is happy that this seems to be over
* Judith Miller (who spent 85 days in jail for refusing to testify before a federal grand jury investigating a source) talks about the TSA withdrawing theirÂ subpoena 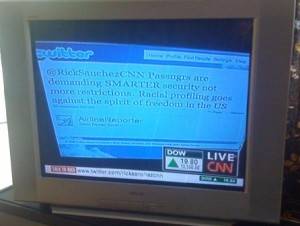 A reader took a picture of my Tweet on CNN and emailed it to me. It says, "Passngrs are demanding SMARTER security not more restrictions. Racial profiling goes against the spirit of freedom in the US"

I was recently asked by CNN to Tweet my opinion on racial profiling. That got me thinking a little deeper about the subject. Tonight I have been talking to some of my Twitter followers about my opinions and realized I needed more than 140 characters to express my opinion since Twitter limits me to only 140 characters.

Quite simply I feel that racial profiling is very wrong and it can actually hurt our security. All over the internetÂ people are demanding that we start racial profiling. People feel that concentrating on one type of person (normally middle eastern male in his early to middle 20’s) will make us safer. Here are the reasons why I don’t agree:

* The guy who just tried to blow up Delta flight 253 was Nigerian and he would not have fit into the typical “racial profiling” that people are looking to have. A real profiler should have seen he paid in cash, had no ID, and I am guessing showed signs of being nervous.

* If we didÂ discriminateÂ people based on race, wouldn’t terrorist groups Â just use people of different races?Â Remember John Walker Lindh? The American citizen who was captured in 2001 and was being trained by Al-Qaeda? With a nice shave and haircut he would NEVER be racially profiled at an airport. I am sure he is not the only person training with Al-Qaeda that doesn’t match the proper “profile.” While we spend time, effort and money training people to racially profile, terrorists will spend time training people that don’t fit that profile.

* As I said in my Tweet to CNN, we don’t need more security, but smarter security. Part of the smart is getting people who are highly trained to detect a person who is about to kill himself and a few hundred other people. No matter how much they hate America or are ready to die for their cause, that is going to make anyone a little nervous. Professional (not the people making ~$35k with a TSA patch on their shoulder) profilers are able to tell the difference between someone who is nervous to fly and someone nervous that their bomb won’t go off.

* It is just wrong. Even if I honestly thought racially profiling passengers would increase my security, I would rather be less secure than participate in a system that places people intoÂ categoriesÂ based on their race. We have worked very hard as a society for the past 50+ years for racial equality and this would be a HUGE step backwards.

* Will it spread? I hate the saying “it’s a slippery slope” but it kind of works here. If we start racially profiling with flying, then why not with shoplifting or with jay-walking? I am NOT ok with even thinking about whatÂ precedentÂ it could set.

I have seen the quote from Benjamin Franklin a lot today (mostly thanks to FlightWisdom) and it is perfect for this concept: “Those Who Sacrifice Liberty For Security Deserve Neither.”

Thank you to all my Twitter followers for motivating me to write this. Also be sure to read Lou Young’s, story about racial profiling (thanks toÂ @JonUPS for pointing this out to me)

Ok discussion time, what are your thoughts?

Thanks Rita for taking the picture