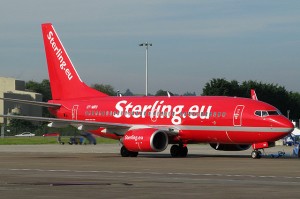 Sterling Airlines was founded in 1962 and was based out of the Copenhagen airport. Originally called “Sterling Airways,” the name was changed to “Sterling Airlines” when it merged with Maersk Air in 2005. Maybe Sterling liked the idea that Maersk had Boeing 737’s that were almost all one color and wanted to do the same. But instead of using blue, Sterling went with red… lots of it. Although they did have a special blue livery that looks pretty good, but still had red winglets.

There would have been no mistaking this livery. A red fuselage, engine cowlings, winglets and tail. Some airplanes had the “Sterling.eu” and others had “Sterling.com” or “Sterling.dk” on the side of the aircraft. For me, it is a little bit too much and reminds me of Virgin Blue’s livery. That is not a good thing since I am not a huge fan of Virgin Blue’s livery; although I think I might like the old Sterling livery better.

Sterling was was able to grow to 1,600 employees, 29 aircraft and about 40 destinations, but it didn’t stop them from running into financial difficulties. In October 2008 they had to file bankruptcy and ceased all operations. Cimber Air made a deal to buy the name and branding, but not aircraft and changed their name to Cimber Sterling Airlines.

Thanks to David Brown (not me — common name) for pointing this one out.