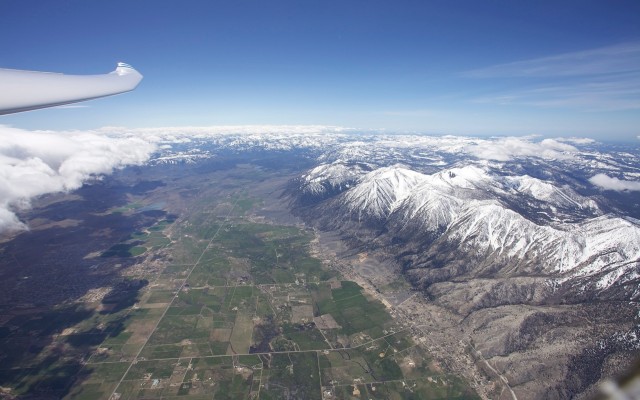 Let’s pick up where we left off in Gone Gliding, Part Two, shall we?

We’re at Minden-Tahoe Airport in Soaring NV’s LS4 glider, hooked up to the Piper Pawnee towplane, and just starting our takeoff roll. Spencer, our ground crew, runs alongside the glider for a few feet while holding the wingtip. The ailerons are alive in a couple of seconds, and I hold the wings level with the stick, while steering along the runway centerline with the rudder pedals.

With the single main wheel rumbling under my seat, we accelerate quickly as we’re hauled along the runway. A little bit of forward stick gets the LS4’s tail wheel off the ground, and then I move the stick ever-so-gently rearwards. The glider levitates, and we carefully hold position just a few feet in the air, right behind the tow plane. Now that we’re airborne, we’re less drag for the Pawnee, and Silvio lifts off. 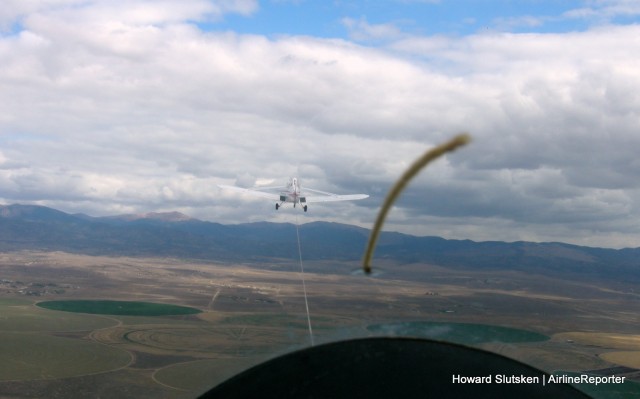 I’m primed for a possible rope break, and glance at the altimeter as we cross the end of the runway. It shows a bit under 5,000 feet, and I call out ’œ200 feet!’ We’ve passed the first ’œgate’ at 200 ft above the ground, and if the rope breaks, we can now safely fly a 180-degree turn to land downwind on the runway. Silvio starts a climbing left turn to cross over the airport, and we’re nicely locked in, on tow. The feeling is something like being pulled behind a ski boat, and I’m not even thinking about what I’m doing to the controls, just reacting and flying. Heading east, and crossing over Runway 34, I relax. If the rope breaks now, we’re high enough to easily complete a normal pattern and landing.

As we continue to climb, I call Silvio and tell him that we’d like to ’œbox the wake,’ which is great practice while on tow. He acknowledges, and I start the maneuver by climbing a bit above the towplane, while keeping the rope taut. I stop for a moment, then fly the glider to the right, and stop again at the first corner of the ’œbox.’ Descend a bit, and stop below the towplane at the next corner. Now it’s a slide across the bottom of the box, stopping at the third corner.

Gentle nose up, keep the rope taut, climb above the towplane, and stop at the last corner. Then slide back behind Silvio, hold, and drop back down into the normal tow position, lining up the Pawnee’s horizontal stabilizer with its wing. Smooth, smooth, smooth, all the way around, and I don’t think that I yanked the Pawnee’s tail, even once. I realize that I’m grinning ’“ nailed it!