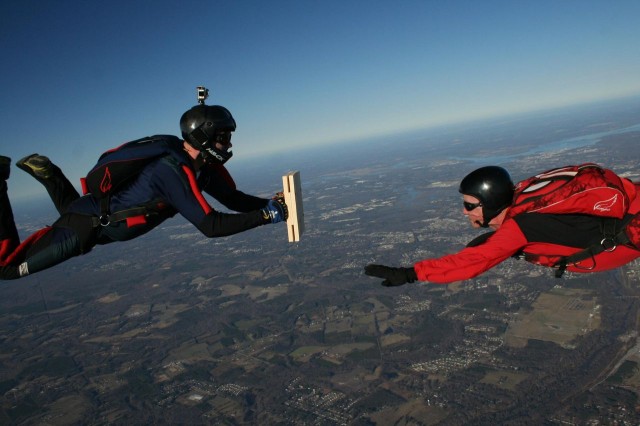 Not long ago I was approached by Ernie Torres, aÂ Tang Soo Do Black Belt and AFF (advanced free fall) skydiving instructor who also happens to be a First Class Petty Officer in the US Navy. He came to me to share his ambition to shatter (pun intended) a skydiving world record which was set in January by Jason David Frank. You may remember Jason as the Green Power Ranger. According to Ernie:

“A new world record was set that combined the skills of skydiving and martial arts. This record involved breaking boards, which is normally performed during a martial arts demonstration… while skydiving. After seeing the attention it received, one thought came to mind; I can do better and use the publicity to raise awareness for theÂ Wounded Warrior Project.“

Convinced he could further advance the world record given his uniqueÂ skill set and background, Ernie approached the good folks over atÂ SkyDive ArizonaÂ who agreed to donate the air time, the crew and all the skydiving talent that he would need to support him in hisÂ endeavor.

I reached out to Jocelyn Bernatchez, Marketing and Events Coordinator at SkyDive Arizona for details. The world record attempt will occur on Thursday, May 23 from their base in Eloy, AZ, which is roughly halfway between Phoenix and Tucson. Ernie will be joined by a crew consisting of some the most experienced skydivers in the US, likely including divers from Arizona Arsenal and Arizona Airspeed, the twoÂ premierÂ Arizona skydiving clubs. According to Jocelyn: 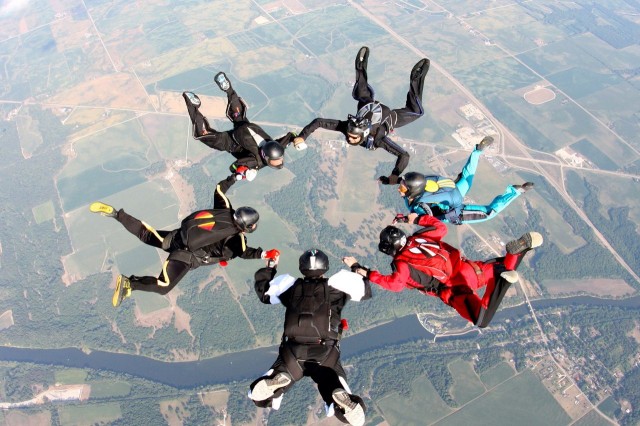 I was hoping to give a bit more background on Ernie’s outstanding military service and his transition to soon becoming a veteran. Through my Navy contacts I was able confirm my assumptions. He’s indeed a decorated sailor with an exemplary service record. However, Ernie very carefully deflected all of my attempts to get this information directly from him. He always put the focus back on his cause:Â The Wounded Warriors, “Those that have sacrificed much more than I have. Those are the people that I am striving to support with this endeavor.”

The Wounded Warriors Project (WWP) is a tax-exempt 501(C)(3) nonprofit organizationÂ whose mission is to honor and empower wounded warriors.Â They receive a 4 star accountability & transparency rating from the third-party charity auditingÂ firmÂ Charity Navigator.Â The WWP provides services and programs to meet the needs of injured serviceÂ members. A worthy cause, right? Let’s dig deep and support Ernie in hisÂ endeavor. All funds go directly to the WWP. No third parties, no gimmicks. Just helping our wounded servicemen and women.

You can follow Ernie’s progress onÂ YouTube,Â Facebook,Â TwitterÂ and of course I will cover the jump here.

While it’s not yet decided which perfectly good plane Ernie and team will be jumping out of, I know I have my fingers crossed for the old reliable N86584, a 1942Â DC-3. How about you?