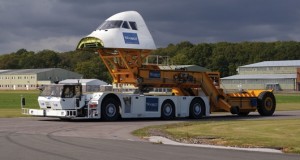 Normally an airliner is pushed back from the gate with an airplane tug.  Once the aircraft is cleared of any obstacles, the tug disconnects and the aircraft moves on its own power down the taxi way and takes off. When there are back ups on the taxi ways, airlines waste fuel and create additional pollution into the atmosphere.

Ricardo CEO Dave Shemmans said, “We are extremely pleased to have been able to play such a central role in the development of this innovative concept which could dramatically reduce the CO2 emissions of commercial aviation while improving air quality and reducing noise pollution in the vicinity of the world’s major airports.”