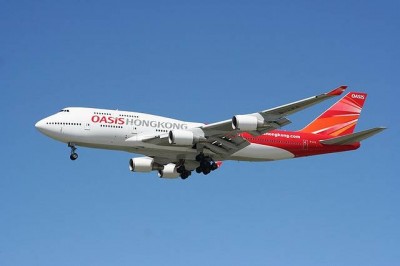 Oasis Hong Kong Airlines used five Boeing 747-400’s to provide low-cost service from Hong Kong to London and Vancouver, but it didn’t work out for them.

The problems they encountered during the first flight, should have been weary. The airline’s first flight back in October 2006 had its fly-over rights pulled by Russia just an hour before take off. This caused the flight to be delayed for 24 hours…not a good start.

The airline’s low fares were popular, but they weren’t enough to cover their costs. In April 2008, the airline went under.

One of the cool things about it going under is there are quite a few cool pictures of four of the Boeing 747-400’s hanging out together.

The livery is nothing too special, but I think it works. Big writing with the name going down the side of the aircraft and the tail looks like a party.