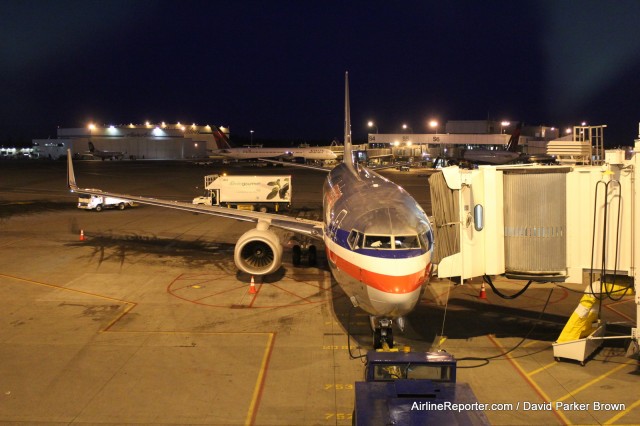 It takes quite a bit to get me up at 4am. Having the chance to spend about 40 hours flying on a premium product is just about enough to do it. I was recently invited to check out American Airlines new Boeing 777-300ER on a flight from New York (JFK) to London (LHR). I was set to leave at 7am on Monday and be back home by 10pm the next day. This was going to be one heck of a great #AvGeek adventure (note: American covered all my flights).

It did not take too long to get ready for my trip. One back-pack with a change of clothes, laptop and camera. Soon enough I was sitting in my car ready to rock and roll. I turned the key… nothing. Tried again and once again nothing. Oh boy.

After ten minutes of messing with my main vehicle, I decided to take my secondary car which is a 1987 Ford Bronco. Oddly, it is not known to be very reliable, but I was going to have to take the risk and started the 45minute drive to SEA. Hopefully this was not a sign of things to come.

Even with my vehicle issue, I was able to make great time to the airport, parked and made my way inside. With longer trips, I will find alternative parking options, but with getting to the airport at about 5:30am and scheduled to return the next day at 10pm, I decided just to park on-site and pay the $28 per day (heck, I get extra miles to boot).

With just one bag, normally getting to the gate would be a breeze. But I had a non-rev media ticket and with most airlines, I am not able to check in online and need to go to a ticket counter. No worries, I was flying First Class from SEA to JFK and had a priority line waiting for me — maybe.

Walking up to the counter the economy line had about 20 passengers, but my special line had no one — bonus. Unfortunately the agent working the First Class line was was on the phone, but I figured I could wait a few minutes, but at the five minute mark it got a bit annoying. The agent had not even looked up to let me know that he knew I was there. Not a huge deal, but a simple recognition that I existed could have gone a long ways.

Instead of waiting on the ticket agent, I decided to give an open kiosk a whirl. About half the time they work with the media tickets and the other half they do not. The good news is it seemed like it was going to work, but the darn thing would not scan my Passport. Luckily there was a nice woman there who was able to quickly help me and get my boarding pass with a smile and I was off to my gate. 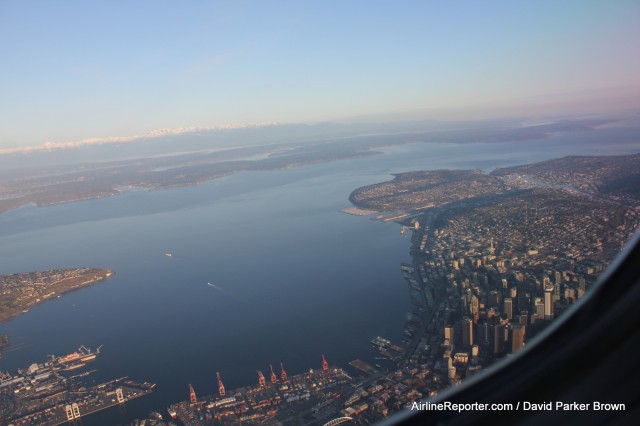 Lifting off from Seattle. Do not fret that I have my “electronic” camera device on below 10,000 feet. I had permission from the airline!

My premium ticket was also able to get me quickly through the security line with only one person in front of me versus the 50 of so in the main line. SEA operates body scanners at each check point, but to date, I have still not been scanned at my home town airport (and only twice ever other places — darn you AMS and TPA). Per usual, the TSA were operating scanners at two of the four bag scanners and I was easily able to choose a line without a scanner. I am by no means a fan of the body scanners, but if you are going to operate them, at least do it in a fashion where they are not so easily avoidable.

However, the TSA made it up to me during boarding when my bags were randomly selected to be searched. I have to say that the two TSA gate agents were some of the nicest I have interacted with and I am really glad I went with a conservative pair of boxer shorts.

Boarding was quick and easy. I was greeted by my last name, my jacket was quickly hung up and offered water, juice or champagne — classy. This level of attentiveness remained the entire way to JFK and honestly is not what I normally expect when flying domestically, even in First Class. Realize this has nothing to do with me being media. I was not taking any photographs inside the aircraft and everyone was receiving this same level of treatment. I was impressed. 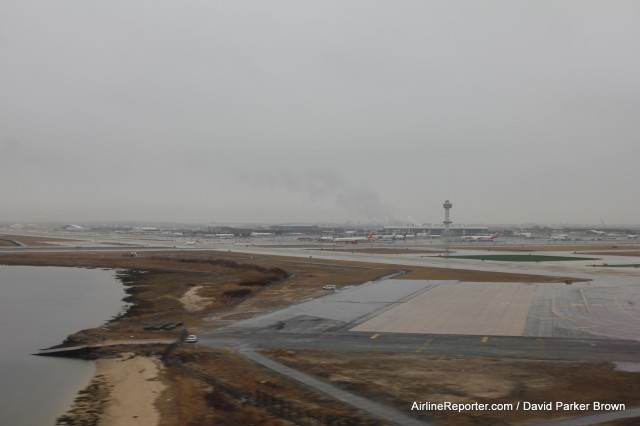 Landing at JFK where the weather was not too pleasant.

Lifting off from SEA on a clear day is always a great reminder how much I love the town and the surrounding area. It might be a shocker for some of you, but many take offs I experience are cloudy and gray.

Once hitting the 10,000 feet mark, I was excited to get back online. Fired up my laptop and went to connect to the GoGo in-flight internet. Then I saw the costs: $10.00 for an hour, $20.00 for three hours, or $21.95 for the entire flight. I get the fact that most people on business travel will just expense this out and that it costs money to provide the internet, but this was just too much for me at the time. I think if it were $15, I would have gone for it and was thinking I might do the $10.00 during the 3rd hour in the flight, but sleep got in the way.

The American domestic First Class seats not only have a decent recline, but they also move the bottom of the seat forward. One of my favorite features was the arm rest next to the window is able to raise, allowing access to the additional space by the wall. This provided ample comfort to get in a few hours of sleep, so I could be well rested for my 777 flight. 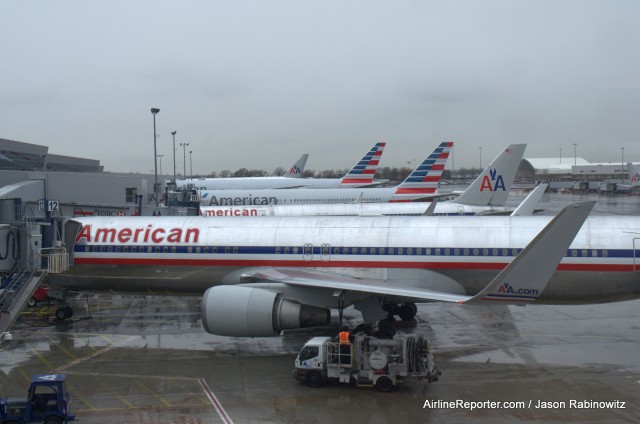 It had been a while since I flew into JFK. Many airports, you land and it only takes a few moments to get to the gate. Not here. Post landing, it took a good 20 minutes before we arrived at the gate. At least I had a window seat and was able to spot planes turning green.

After collecting my things, I was on the jetway, checking my email on my phone and missed the gentleman who was there to great me: Phil Derner Jr who runs NYCAvitiation.com. A nice little surprise. Also, Jason Rabinowitz (who writes for both of our sites), was also on his way to join us to help me take photos of American’s 777-300ER. It was a mini AvGeek get-together. 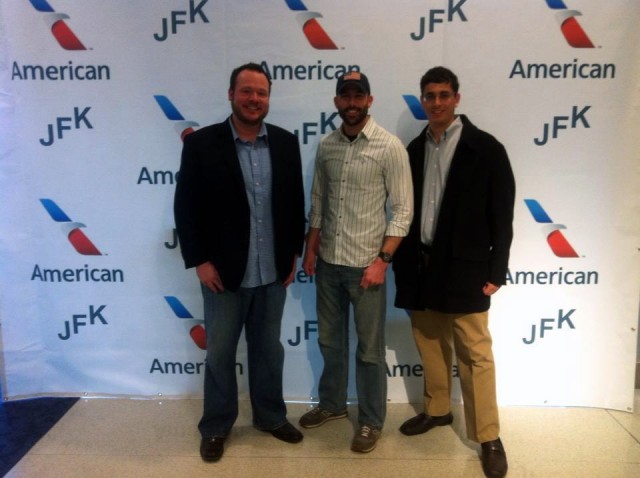 AveGeeks Unite! Me, Phil Derner Jr with NYCAviation and Jason Rabinowitz aka @AirlineFlyer pose at JFK.

To celebrate our gathering, we took a photo in front of a JFK/American backdrop that was at some random gate. I forgot I was not in Seattle anymore and when I asked a gentleman sitting by us if he would take a photo, he looked at me like I was nuts. Luckily a nice lady next to himÂ offered and after about five attempts, we ended up with one that was not super blurry.

After our photo shoot, we were off for some beers while waiting for the American Airlines representative to escort us on to the aircraft. 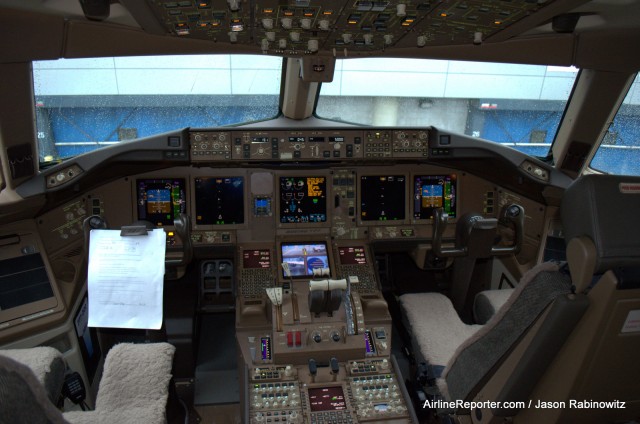 Soon, it was time to pre-pre-board the 777-300ER. I have found trying to board super early provides much better photos than rushing around with a bunch of passengers. This also allowed us to view First Class, economy, the flight deck (bonus) and the crew rest areas.

I found it pretty interesting that multiple American employees kept boarding the plane to take a look at the new plane and interior. I think that shows the excitement that the new aircraft is bringing to the company. After getting everything we needed, we de-planed, Phil and Jason went back to their normal lives and I was back on the Worldliner 15 minutes later prepping for my flight to London. 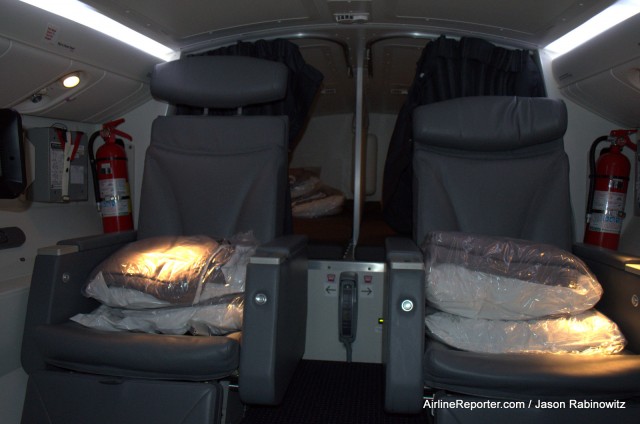 Pilot rest area located above the main deck in the front of the 777-300ER.

Then I took off, flew for a bit and then landed. Awesome review right? Do not worry, a full story on the flight is coming soon, but for now, the 40 hour adventure continues (minus the actual 777 flight). Insert cheesy time transition here.

We arrived at the gate a little late, but still giving me about six hours in London before getting back on the same plane and heading to New York. It was time to find the lounge.

Unfortunately, I avoided customs and was able to head to “connecting flights,” go through security, check in and be ready to go. I say “unfortunately,” because this means I did not get my Passport stamped — I know, tough life. 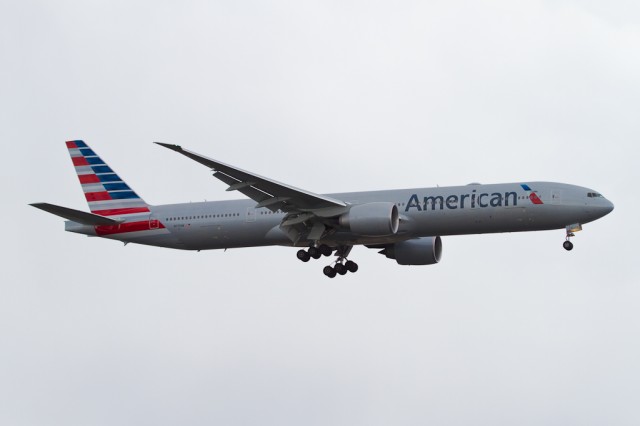 At the lounge I was looking for two main things: coffee and a shower. Luckily it had both. I was able to keep productive (and hydrated) waiting for my return trip home. My departure time was 12:30pm local time, but that was 5:30am at home. I had not been able to sleep too much, so by the time we boarded, I was exhausted.

I found my seat, got situation and then…Â BAM, it was four hours later. I must have woken up at some point, since my seat was fully reclined. I do not remember taxi, take off or the missed meal service (again more details on my 777-300ER flights later). 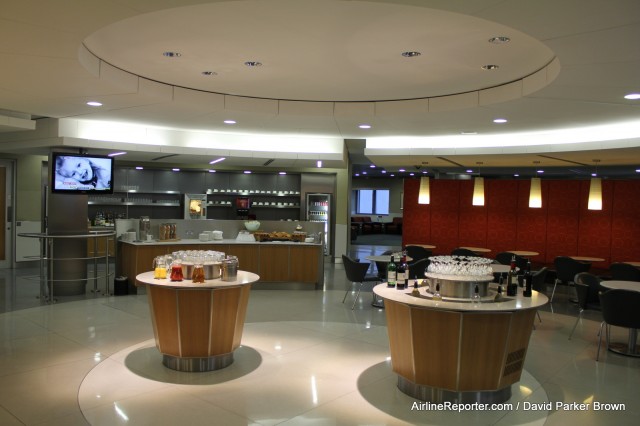 Admiral’s Club in London — my home for about five hours.

I was once again back at JFK. When going though customs, I was some-what excited to be asked about my trip and how long I was in London. Maybe even get additional screening from having such a weird story. Instead I was greeted by probably the nicest Customs official I have interacted with, but no questions about “how many days were you in London?” Oh well.

After going back through security, I found the Admiral’s Club and relaxed for about an hour before taking my final leg back home to Seattle. Once getting settled in my seat, the captain came on to let us know that the flight was going to be a “home coming” for the 737, since it was built in Renton. Awesome — I like this guy.

My flight back to Seattle started very similar to my flight back to New York. Boarded and back to sleep I went. Upon waking, one of the flight attendants noticed and askedÂ me if I wanted one of the meals — nice. Most times when sleeping through a meal service, I have to ask. I ate some sort of beef (I forgot to grab the menu), but I was too full to have another ice cream sundae (I had one on the 777).

The flight landed back in dark SEA about 30min early. In less than 40 hours I had just flown about 12,000 miles. I always have wondered if I have a limit on how much I can fly before I get tired of it. This was as close as I have gotten, but after a nice rest in my own bed, I would have been ready to hit the sky again.

I will go into a bit more detail with my next story, but I ended up with noticeably better service on my domestic American Boeing 737 flight than I did with the international 777 flight, but the product on the 777 was strikingly more impressive. The interesting part are the flights are about the same length.

It leaves the big question: does an amazing product with mediocre service trump a mediocre product with great service? Stay tuned for my answer and put your thoughts in the comments.

SEE ALL 76 PHOTOS FROM THE AMERICAN AIRLINES TRIP